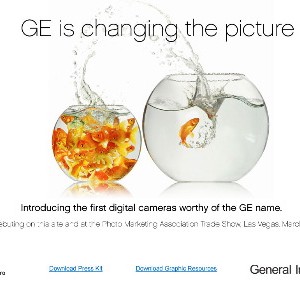 Throw the name General Electric into the digital camera ring as one of the most trusted consumer brands in the world. GE has announced their entry into the category with product debuting at PMA 2007.

GE and corporate newcomer General Imaging Co. announced yesterday that the two companies have reached an exclusive worldwide licensing agreement by which General Imaging will design, manufacture and distribute an all-new line of GE-branded digital cameras.

“We were seeking to enter the digital camera arena and found a perfect partner,” said Brad Irvine, GE President of Trading and Licensing. “The cameras from General Imaging are truly worthy of the GE name, representative of GE’s leadership in technology and innovation.”

“GE is a brand that consumers around the world know and trust,” he said. “This is a brand known for innovation and technical leadership. We fully intend to deliver on the GE brand promise and even further enhance the GE brand value.”

Headquartered in Torrance, Calif., General Imaging brings together a cast of photo industry veterans. Komiya is a former president of Olympus Imaging Corporation.

Leading sales efforts in North America will be Rene Buhay, a former Vice-President of Global Sales for ArcSoft who had also headed North American sales for both Samsung and Ricoh. Noted industrial designer Takeyoshi Kawano will be the company’s chief designer. Kawano’s design credits include the Sony Walkman, the Sony VAIO computer and the Olympus Stylus camera series.

“Style will play an important part in our product development,” Kawano noted. “Consumers are demanding not just advanced features but stylish designs. We’re responding to that demand with cameras that are a statement of style and at the same time have all the latest technology.”

According to Kawano, advanced features such as image stabilization, high ISO sensitivity, and panoramic stitching will be standard on all models.

“With advanced features like this on all our cameras, it will be difficult to take a bad photo,” he said. “GE cameras will literally change the quality of pictures for today’s consumers.”

In a statement released yesterday, GE explained that they will initially release entry-level digital cameras including a 7 megapixel model with a 2.5-inch LCD screen. The company added that higher-end GE cameras will offer up to 12 megapixels of resolution and 3-inch LCD screens. A photo printer will also be included in the line.

With Westinghouse entering the digital frame category in 2006 and now GE in the digital camera game, can a consumer imaging product from Whirlpool be far behind?