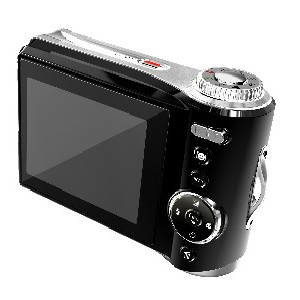 Amid all the raised eyebrows back in the late Winter/early Spring of this year, when General Electric abruptly entered the digital camera market, the company quietly went about their business…even jumping into the PMA Show at the last minute with one of the events’ biggest booths.

Their initial play in this space has been with low cost, compact models and we recently test drove their A830. The company has certainly packed in the features as the A830 includes 8-megapixel resolution, face detection and an ISO of 1600. With an MSRP of under $150, GE is making quite a pitch for the digital novice and the cache of the GE brand should help in that effort.

Brand name aside, we were immediately struck by the cameras’ exterior – a lightweight combination of plastic and metal that was as easy to operate as it was to hold. Minimal buttons and a dial for shooting modes leave the body rather unencumbered.

One complaint, and it is a common one in the point-and-shoot digital camera market, is the camera’s shutter-lag. Adjusting for this delay was bothersome and made shooting children a bit of a problem.

Adding image stabilization and a 3X optical zoom to the package at the aforementioned price point was a pleasant surprise, but we were particularly impressed with the 9-point autofocus along with the variety of scene modes (Macro, Sport, Kids and Pets, Party/Indoor, Foliage, Snow, Beach, Fireworks, Aquarium, Portrait, Night Portrait, and Landscape) that were easy to access and seemed to cover most common snap-shooter situations.

So a crowded market gets a bit more crowded but GE has entered with a solid digicam for a beginner at a price that should catch as much attention as the GE brand name. Their initial line also includes a much more sleekly designed, compact model (G1) as well as models with higher megapixel counts.