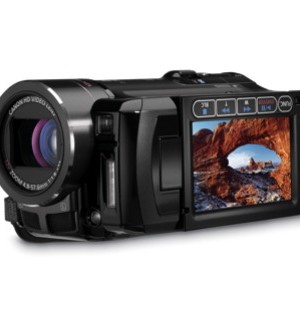 You may not understand how the semi-conductor industry is managing to squeeze previously-unconscionable gobs of memory into smaller and smaller chips, but you’ll certainly see the effects of recent advances in memory card technology in most new recording product this year. Big-gig SD cards are leading to smaller camcorders and much more versatile shooting experiences.

Panasonic announced on Saturday that it will introduce a 32 Gigabyte SD card to the market sometime next month. 32 gigs of memory at “Class 6 speed specification” (which means you can smash huge amounts of digital info on there every second) all on a card the size of postage stamp. That’s enough memory for over 6,000 high-res JPEG photographs or over five hours of high definition video recording. The card format is SD HC (“high capacity”), meaning that your old card reader may need an upgrade, but most new flash memory card products, from cameras to built-in card readers on laptops, accept this format now.

Michael Zorich, Canon’s video division marketing director, was ebullient about the ramifications of the gargantuan gig cards as he promoted the company’s new lineup of 12 camcorders for ‘08 (nine standard definition, three high-def, with some Mini DV and DVD formats among the mix too).

“We’re really putting our force behind flash memory because of all the advantages it offers,” he said. “It allows us to make HD camcorders in an ultra-compact size with no moving parts, longer recording times, flexible media exchange, lower power consumption. I believe the public embrace this format for its greater convenience.”

Zorich says some of those new camcorders, like the FS10 and FS11, both super-small HD hand-helds which will hit the market for under $600, have “dual flash memory.” That means you can shoot onto 8 or 16 gigs (depending on the model) of built-in flash memory and then transfer video onto a removable SD card…convenient if you want to make a quick copy of a party video for a friend.

Panasonic’s camcorder announcements reflect a flash-happy philosophy as well. Many of its new models, some of which have lavish 42x and 50x optical zooms along with Optical Image Stabilization, record to SDHC memory cards. The DSR-SW20, a $399 ultra-portable camcorder due out in February, is shock-proof and even submergible…all because recording to flash memory means a camcorder needs far fewer mechanical (a.k.a. breakable) parts. With a 16 gig SDHC card, the DSR-SW20 will let someone shoot for 13 hours without having to change a tape or lug extra batteries.

Panasonic also announced that some of its HD TV’s will arrive to market with SDHC readers built-in, allowing consumers to pop out the memory card from the camcorder and watch the video on the big screen immediately, skipping the transfer-to-computer step altogether…just another killer-app resulting from advances in the same technology (those miniaturized flash-memory chips) that have given us digicams, removable memory for cell phones, and, of course, iPods.