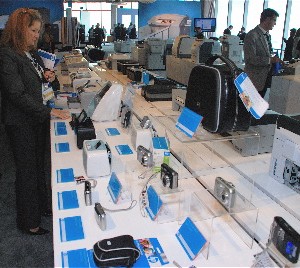 HP Imaging and Printing Group yesterday launched a multi-front effort to bring more full solutions, including Web-based services, to retailers and their customers.

The Print 2.0 initiative, with sections aimed at the retail, enterprise and commercial printing and graphics markets, is designed to shift sales from “printers to printing,” said Vyomesh Joshi, executive vice president of the group.

To better leverage the Internet and the way consumers are using it to create, manage and distribute photos and documents, HP will begin focusing on the number of pages customers print instead of how many physical printers it sells, Joshi said. HP’s page-per-share is a measly two percent while its market share of printer sales is almost 50 percent, he said. Joshi hopes the strategy will help the company and its partners capture a larger chuck of the 53 trillion pages consumers and businesses are expected to print by 2010.

“That’s the opportunity we have to think about as partners,” Joshi told a packed room of customers during the two-day partner event at 7 World Trade Center in New York City. “The model allows us to move from a technology-centric approach to a customer-centric approach.”

For retailers, that model translates to the sales of a full solution, which can include HP printers; cameras; consumables, such as ink and photo paper; a line of camera bags and other HP-branded accessories; and a variety of Web services that retailers can profit by.

Those include new HP partnerships with Yahoo, Flickr, Snapfish Windows Live and other photo services that help customers “mash,” create and publish digital content in new ways. HP also unveiled its “HP Print It!” button. The Web tool utilizes the Tabblo Print Toolkit, which provides a formatted document for easier, more organized and less wasteful printing. Another service, launched in partnership with Gwen Stefani, gives fans access to the pop star’s Web site where they can print greeting cards, CD labels, paper dolls and mash their photos and text into a book of exclusive pictures from Stefai’s current tour.

A new NextDayTV service, in which retailers can sell DVDs of current and local TV and sports programs shortly after the event, caught the attention of several retailers. The service is currently in pilot with 10 Wal-Mart stores.

John Sugrue, general manager of Walgreen’s photo finishing division, told Dealerscope the service could be a popular draw, but said it could be stronger if it also offered a burn-on-demand feature, which could cut shipping costs and improve inventory.

Raoul Heinze, strategic planning manager of the imaging and printing group, said the overall service is still in its early phase and that retailers shouldn’t expect a burn-on-demand feature for at least a year, given the digital rights management and security issues associated with trademarked video content.

HP will support the launch with a $300 million global marketing campaign, called “What do you have to say?,” as well as retailer marketing support and training programs, said Scott Tuthill, vice president of the group. Retailers should speak with their distribution partners to access new elements of the partner program, Tuthill said.