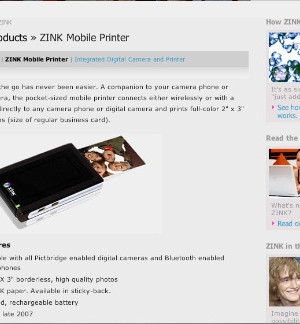 Zink Imaging LLC, based out of Waltham, MA., is claiming they are bringing an “inkless printing system” to market that removes the need for a separate ink/toner cartridge or ribbon of any kind.

The company recently surfaced shortly after their purchase of Polaroid technologies and assets and their “inkless printing system” actually revolves around a specially designed print medium. The company explains that they have developed a specially coated paper embedded with dye crystals along with a protective polymer overcoat. The dye crystals, which are described in greater detail on the company’s Web site (www.zink.com) are initially colorless, but the application of heat when the paper passes through a special Zink printer activates and colorizes the crystals producing what the company claims are, “high quality prints that are resistant to damage and long lasting.”

The company also says that the crystal technology works on various base materials including different types of paper and plastic.

While the company hasn’t officially announced any products based on Zink technology just yet, the site does show a portable, hand-held printing that produces 4×6-inch prints and hints at additional printers with varying output sizes that may be to come.

Perhaps based on the purchase of former Polaroid technologies, the company notes that the printers can be made small enough to be placed “anywhere, even inside of a digital camera.” While the company claims they have “several partnerships in the works,” nothing has been formerly announced and no product is due for release til later this year. The company’s name actually stands for Zero Ink – Zink. We’ll keep an eye on this company and its emerging printing technology as the year rolls along.