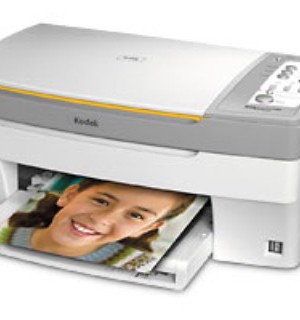 As the battle for control of the home printing market rages on, the strategy has always been for manufacturers to sell the printers at extremely low costs as the real profit was to be made on the replacement ink cartridges.

Kodak entered this market earlier this year with the reverse strategy – holding the line on the cost of their printers but offering replacement ink cartridges for as low as $9.99 (black) and $14.99 (color). Kodak was billing this marketing strategy as having double appeal as retailers had a slightly better margin on the printers and consumers would suffer far less “sticker shock” when they ran out of ink and headed out to buy replacements.

Kodak has ramped up this strategy with the recent announcement that they have extended the consumer reach of their home inkjet printer line, “while reinforcing the product’s unique value proposition” by signing a deal with Wal-Mart to sell their EasyShare printer line. The Kodak EasyShare 5100 All-in-One (AiO) Printer (MSRP $129.99), is now being sold through Wal-Mart at over 2,600 locations nationwide.

“This new offering is an extension of Kodak’s longstanding commitment to making technology easy, affordable and widely accessible to consumers,” said Phil Faraci, President of Kodak’s Consumer Digital Group. “Momentum is clearly building as our unique AiO is now widely available at Wal-Mart Superstores, along with Best Buy and Office Depot in the U.S., Dixon’s, Media Market, PC World and Currys in Europe and JB HiFi and select Kodak Express stores in Australia.”

As part of this “low cost ink” initiative, Kodak conducted a recent study through Ipsos, a global survey-based market research company, and told us that the survey revealed that U.S. consumers rank cheaper ink cartridges and higher-quality photos as the #1 and #2 most desired features and functionalities of an inkjet printer.

“Almost 70 percent of home printer users cite lower-cost ink as a top priority,” said Faraci. “Kodak designed our entire system with this in mind, and we remain focused on addressing this significant need.”

In an effort to “reinforce its commitment to making ink affordable,” Kodak is introducing a special promo tied to the printers in Wal-Mart, including three additional 5-ink color cartridges (a $45 value) at no additional cost when consumers purchase the Kodak EasyShare 5100 AiO, while supplies last, they add. For imaging retailers, who have long been leery of the home printing market, Kodak added that the low cost ink cartridges will help bring their customers back into the store to buy the ink, along with paper and myriad other imaging accessories.