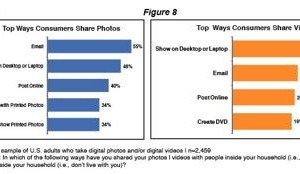 A recently concluded study done by CEA titled Digital Imaging: A Focus on Sharing, drew some interesting conclusions on what consumers are doing with their images today after capture.

While lots of interesting habits are developing with regard to video usage, consumers are still sharing photographs more regularly the study found. Approximately two in 10 consumers share their videos (in some capacity) in contrast to over half who share photographs via email (among other sharing options).

The report also offered up some encouraging findings in the digital print market. More than eight in 10 adults (83 percent) report printing their photographs in some capacity – a significant increase from the 2006 CEA Exploring Revenue Opportunities in the Digital Imaging Market study, when 57 percent adults reported printing photos. In fact, over half say they print them out at home (52 percent), four in 10 report they print them in a store on online kiosk and 15 percent print photos from an online printer such as Shutterfly, Kodak or Apple Web Gallery (note: multiple responses were allowed).

CEA also reported that almost one in five consumers (18 percent) report they do not print photos, demonstrating the influence of online alternatives to printing. However, they pointed out, “This is also a sizeable swing group who might be influenced to print photos with the right value proposition.”

Social Networking sites have begun to dominate the landscape for the way in which consumers are sharing pictures and videos online. For stills MySpace is used most frequently (53 percent) followed by Facebook (38 percent). Women are more likely to post photos on MySpace (55 percent) than men (48 percent), whereas the reverse is true for Facebook, where men are more likely to post their photos (42 percent) than women (35 percent). With video MySpace TV is tops (48 percent) followed by YouTube (43 percent) and Facebook (42 percent).

Retrieval – Tagging
The report also revealed that one relatively newer feature, inserting key words/information in the image or “tagging” the image, generates interest among consumers. One in four photo sharers (28 percent) and video sharers (26 percent) report they want this feature from an online sharing site. Video sharers ages 18-44 are more likely, approximately one-third, to want this feature, suggesting a prime marketing opportunity for manufacturers and online companies as well.

Growing interest in “tagging” or attaching information (e.g., location, background information, commentary, etc.) into a photo or video is further demonstrated when consumers are asked to rate their level of interest in this feature. Among digital photo takers, 45 percent report they are interested in the technology and 37 percent of digital video takers are interested as well.