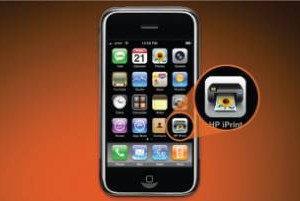 We all have been reading about the new wave of wireless app stores, first popularized by Apple with the iTunes/Apps Store ecosystem – and then others soon followed from Blackberry, Palm, etc. These app stores bypass the traditional channel for ‘software’ distribution and have become wildly popular among the mobile device-carrying public.

The big question for digital imaging and/or wireless retailers is, "Am I really cut out for this?" The immediate answer for many retailers is simply some are and some are not.

Finding the right sales pitch in this new paradigm may require some creativity – but it certainly offers the potential for adding several new revenue opportunities for retailers.

We recently came across an interesting example of a new free iPhone app that might serve as a model for retailers – or at least as a different way of looking at things that are often times perceived as threats and instead seeing new opportunities.

As a retailer, this could be Holy Grail kind of stuff.

Very briefly, the app enables home printing of photos from any iPhone or iPod Touch to networked HP printers. The new Photon app essentially allows consumers to print any photo in their hosted Phanfare collection to most HP inkjet printers connected to a local Wi-Fi network.

Do you sell HP printers? Now, with this app consumers can print photos wirelessly to HP printers from their precious iPhones or iPod Touches in the convenience of their homes. Imagine that! Here’s an opportunity for creative retailers to sell more HP printers to existing customers – and perhaps, more importantly – introduce the notion of printing pics to a new demographic that hasn’t been that keen on it.

Also, consider other data-points revolving around the iPhone. In general, the size of the iPhone and iPod Touch universe is huge and iPhone users are starting to turn into fairly prolific photo-takers and love to share them. This new app is telling you that the sharing part of the equation is not just all about cyberspace – but that there still is a role and a market for the printed memory with this crowd. Why would Phanfare and HP team on this particular imaging app if they felt the iPhone crowd was never going to want prints?

Also important to consider is the fact the iPhone demographic is broadening – it’s no longer the sole domain of the 18-30-year-olds. Isn’t it about time you got a piece of the image-capture action that is happening within the mobile imaging world?

"HP’s goal is to enable printing anywhere, anytime from any device," according to Antonio Rodriguez, chief technologist for Inkjet and Web Solutions in HP’s Imaging and Printing Group. "We are delighted to enable partners such as Phanfare to print at home to HP printers in a low-cost and easy way."

"Phanfare Photon synchronizes all your photos and videos wirelessly to your iPhone where you can view them, caption them and play musical slideshows," added Andrew Erlichson, Phanfare’s co-founder and CEO.

The other exciting part of this equation is the fact manufacturers are opening up the joys of the printed image to the aforementioned iPhone/iPod Touch users in the hope they begin to develop a deeper appreciation for this method of sharing and preserving their memories.

"It simply hasn’t been easy enough for this crowd to get the images from their iPhone, and other mobile devices for that matter, printed," began Tim Greene, a New Jersey-based consumer habits analyst. "The fact remains, this demographic had never made the decision that they hate printed pictures. It just hasn’t been simple enough for them to do."

Phanfare tells us that Photon is part of Phanfare’s archival photo and video hosting service aimed at serious amateur and professional photographers.

Phanfare subscribers can also upload photos and videos from their computer, from Apple iPhoto, Google Picasa, Adobe LightRoom and Apple Aperture. The company adds that photos and videos can be shared via e-mail, on the Web, or pushed to Facebook. Phanfare securely stores over 150 terabytes of user data and serves over 500,000 people per month.

The number of images being captured by wireless mobile devices is staggering and growing every year. This recent Phanfare/HP announcement is further proof that all these images don’t have to forever live in cyberspace alone.