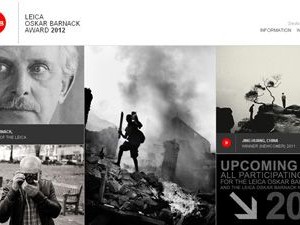 Approximately 2,800 entries from 101 countries were received for assessment by the March 1, 2012 submission deadline, up 40% from last year’s competition total of 2,000 entries. The majority of this year’s entries came from the USA, Germany and China. The winners of the two awards, the Leica Oskar Barnack Award and the Leica Oskar Barnack Newcomer Award 2012, will be announced on June 20, 2012.

Presented for the 33rd time this year, the Leica Oskar Barnack Award’s jury members include: Bruce Gilden, Magnum Photographer, Stephan Erfurt, Director of the C/O Berlin, Valérie Fougeirol, Creative Director of the Magnum Gallery in Paris, Karin Rehn-Kaufmann, Artistic Director of the Leica Galerie in Salzburg and Brigitte Schaller, Art Director of Leica Fotografie International magazine. A video of the jury sitting can be viewed online at leica-oskar-barnack-award.com.