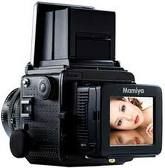 Beginning back in July and running through September 30, 2010, photographers who purchase a new Mamiya RZ33 digital camera kit can trade in their existing RZ67 or RB67 camera body for a credit of $1,000 towards the purchase of their new Mamiya RZ33. There is a limit of one trade-in per RZ33 purchased.

“Photographers are eager to update their equipment to the new digital RZ33, but still want to make good use of their previous RB or RZ67 camera body. Our new trade-in program gives these photographers the perfect way to do this, and makes transitioning to the new Mamiya RZ digital system even more affordable.”