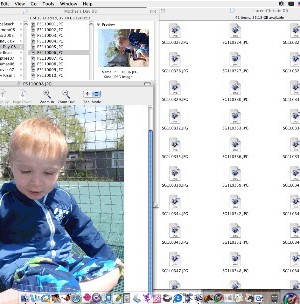 Modern consumer electronics such as digital still and video cameras are capable of making very high resolution, excellent images at very little cost. This has encouraged consumers to take and keep more images and video than ever before. While the content created is beautiful and numerous how will you find the pictures of your son or daughter from when they were 4 to show then when they are 18? Unless you are extremely disciplined and label everything and back up all your content in unambiguous files you are not going to be able to do this easily. Unfortunately neither I nor many of my friends fit into this super-disciplined category.

As mentioned in my recently published book from Newnes Press (a division of Elsevier), Digital Storage in Consumer Electronics, the key to helping people find content is metadata, “A key mode to increasing the intelligence and capability of consumer electronic devices is the use of metadata. Metadata is data about data that summarizes and makes more useful the original data.” Traditional metadata is file headers and other information about dates of creation and modification of a file, the software that was used to create it and who the person is that made it. More sophisticated metadata, such as that used in the creation of movies and videos, includes information on location, who is in the images, timing information and other data that will be useful in editing the content

Metadata can be entered manually, such as with editing of content where a description of a picture or a scene is added by a human being to describe it. This is the most common way to generate metadata today (aside from date stamps and other simple automatic metadata) and because of the effort required the creation of metadata today is rather primitive. In some more advanced cameras a GPS location service can even record automatically where the content was captured. Metadata is extremely useful as we shall see and there needs to be ways to automatically create metadata so the original content is more useful.

As stated in the above mentioned book, “Better for most users is automatic metadata generation where the information about the data file is derived from the content in the file. Such technologies are being developed and they will revolutionize the usefulness of new and historical content.” With such a powerful metadata creation tools users will be able to obtain metadata on their newly captured content and perhaps eventually even on content that they have had around the house for many years and have only a vague idea of what it is.

With this metadata (which is usually text) search engines can help us find the content and depending upon the detail of information created on the content we may even be able to make sure that all unique content is backup up for protection and preservation while not backing up all the copies of the original content (this backing up of only unique files is called deduplication). This would allow us to better save all of our precious pictures and other content and at the same time use our storage devices more efficiently.

Automated metadata could include GPS location information as well as time of capture, device used for capture as well as the storage media, image resolution and other details of how the image was captured. Metadata can be automatically generated for several types of content. For text this could consist of key words or phrases that give the gist of the material, for audio this could be key words or phrases derived from a converted version of audio as well as useful descriptions of non-human sounds. For still or moving images metadata could include image elements that allow recognition of people, animals or places and for the moving image some sort of synopsis of what action occurs involving which elements. For all these data files date and location information (if available from e.g. GPS) could also be useful information.

Indexing of content uses metadata and externally generated keywords about individual files to speed up search of this content. If we can extent this capability to include being able to abstract the context of different pieces of content these tools could become even more useful. Much investment and research is currently going into developing such capabilities. The benefit to users will be enormous but unfortunately the products are not yet available that can help users create all this metadata automatically. The value of metadata is enormous however and the company that effectively products such automated metadata generation may reap a large reward and truly provide a useful service.

Metadata can even play a larger role in the ultimate organization of content in a home. It may allow users install systems that focus on the content itself rather than the digital devices where the content is stored. Such focus on the content in a future home could be called Storage Virtualization. This concept is also explored further in Digital Storage in Consumer Electronics. The book looks at how metadata could be incorporated in digital storage devices themselves to provide even greater capability of organizing and finding digital content.

“In a digital storage device metadata plays a similar important role in telling the hard drive what sectors of data blocks must be combined to create an actual data file. At the present time, although this metadata may be stored on the storage device, the actual reconstruction of content and the use of the metadata to organize and use the content is done in the microprocessor of a host device. The software that is used to recreate the data file from the raw blocks of data using the file metadata is called a file system.