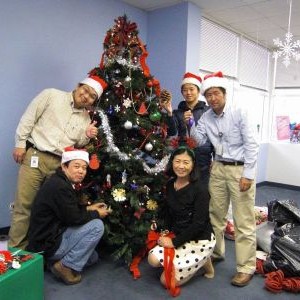 With the country facing challenging economic times, high levels  of unemployment and an unpredictable stock market, 2009 saw many people and companies focusing on their own survival rather than helping others. American’s cut back on spending, which resulted in less opportunity for business everywhere, especially for photographers.

One company that continues making an effort to help its customers, and the community, is Mitsubishi Digital Electronics America (MDEA). By offering printers to event photographers in support of non-profit fundraising events, they were able to help their customers put money towards charitable causes rather than spend it on a printer.

They have also been donating time and money for various other causes. They’ve been  spending the holidays delivering food and presents and they have helped to raise  money and awareness with their philanthropy program, the HOPE Team.

HOPE stands for Helping Other People Excel, and the employee-run philanthropy team does just that. Over the years, the HOPE Team has partnered with some of the country’s most well-known charities and help-based organizations to ensure that the less fortunate have the recourses to succeed. Working with organizations like the Special Olympics, the Children’s Hospital of Orange County, the American Cancer Society and the Pediatric Cancer Research Foundation, MDEA has helped to raise over $100,000 and spent close to 2,100 hours volunteering their time.

“Although this year has been a difficult for many companies, Mitsubishi Digital Electronics America has remained committed to donating our time and service for the good of others,” stated Darla Achey, Marketing Specialist for Mitsubishi Digital Electronics America. “We realize that people need help now more than ever, and as one of the pillars of the community, we are very proud to be the ones who offer it.”

In addition to partnering with established organizations, in 2009 MDEA has also worked independently to help the community in Southern California. They helped people  prepare for the holidays by collecting Thanksgiving dinners for families in need in Orange County, and they also performed a Christmas project with families at the Marine base at  Camp Pendleton in San Diego. They also recently raised $10,000 for two local schools in  need in Orange County.

“As one of the leading providers in products for event photographers, we understand that they need help just like anyone else,” continued Achey. “That’s why we have taken any opportunity that has come up to loan equipment out for non-profit fundraising projects, and we are always willing to do projects like that in any community.”