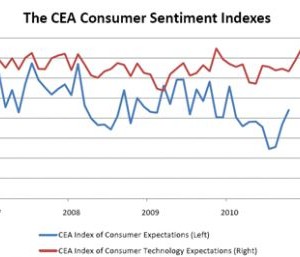 The CEA/CNET measure of consumer confidence in the tech sector reached an all-time high in this month, while overall confidence hit an 18-month high.

December set a new high for tech spending sentiment, suggesting individuals closed out the holiday season with tech on their minds,” Shawn DuBravac, CEA’s chief economist and director of research, said as part of the announcement. “This late jump in tech sentiment suggests a strong holiday push for technology spending in December.”