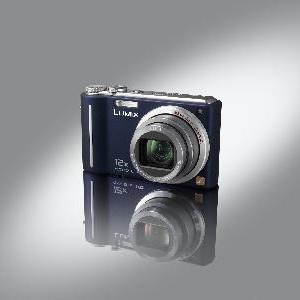 This spring Panasonic will launch a series of new compact digital cameras to the US market, most of them aimed at the step-up customer who’s looking for more advanced features but also easy operation. Despite the down economy and heavy price competition, the company hopes to achieve 15 percent market share by 2010. Panasonic invited a group of journalists to a special sneak peek at the products in Miami.

Key to the new line is what Panasonic calls “hybrid” cameras, models that can be used for both still photography as well as high definition video. David Briganti, national marketing manager for the US, noted that 62 percent of consumers use the movie mode on their digital cameras, but few models today are capable of high definition. On top of that, HD video, particularly the motion JEPG format used in many cameras, takes a lot of storage space making it impractical for users. To address that, several of the new cameras will utilize a video format called AVCHD Lite, which is a subset of the AVCHD standard adopted by several manufacturers. AVCHD Lite records in 720p/60fps H.264 with Dolby AC-3 stereo sound. An 8 GB memory card will hold one hour of video at highest quality. Another benefit of the format is many new HDTVs and Blu-ray players can play the files natively right off the camera’s memory cards. This feature was demonstrated with Panasonic plasmas and players.

The first model shown was the ZS3, the successor to the TZ series. The company is calling this one the world’s smallest 12x zoom camera. It sports a 25mm Leica wide-angle lens, a 10 MP CCD and 3-inch LCD screen. In addition to face detection, it offers face recognition, which allows the camera to recognize a specific face (a spouse or child for instance) and always prioritize the focus on that face. Users can store six faces in the camera’s memory. It also includes an auto-scene mode which selects the optimum scene mode for the users based on the image. It will be available in April for $399. The ZS3’s little brother, the ZS1, will run $299 and include a smaller LCD and no AVCHD Lite feature.

Next up is what Panasonic says is the only hybrid underwater camera. The TS1 is a 12 MP camera that’s shockproof (up to five feet), waterproof (down to 10 feet) and dustproof. It includes a 28 mm Leica lens and a 4.6x zoom. To assist in shooting those high definition videos, particularly underwater, it includes an LED video light. A high-speed burst mode will shoot 10 stills per second. Available in April for $399

The TS1 was followed by the FX580, Panasonic’s first touch screen digital camera. It comes with a 25mm lens, a 5x optical zoom, 10 MP CCD and a 3-inch touch screen LCD. The FX580 (and the non-touch screen FX480) will record high definition video but not in the AVCHD Lite format. Instead they use motion JPEG at 720p/30fps.  It will sell for $349.

As part of the preview event, Panasonic allowed attendees to try out pre-production versions of the ZS3 and TS1 in a variety of shooting situations. To demonstrate the underwater capabilities we visited a swimming pool populated with costumed mer-people. Later, on Miami’s South Beach, we were offered various action, portrait and twilight opportunities including roller-bladers, a volleyball match, an albino python and Miami Dolphin cheerleaders.  A hands-on look at the cameras will be posted on E-Gear.