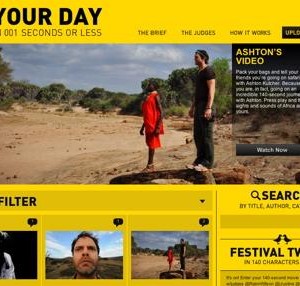 Nikon has  announced the launch of a new integrated marketing campaign that includes the first ever “Nikon Festival” to celebrate, inspire and harness the current popularity of content creation shared through social media.

Nikon is challenging budding filmmakers to upload 140-second short-form video with the theme “A Day through Your Lens” to www.nikonfestival.com and follow @nikonfestival on Twitter for a chance to win up to $100,000 and Nikon equipment to pursue and chronicle their dreams.

Nikon’s advertising star, Ashton Kutcher, will turn the D5000 camera lens on himself for the Nikon Festival by sharing his personally shot video. The festival will be supported by a national TV broadcast and online advertising campaign and will run through the end of the year. The festival video submission period begins November 10 and will be open for entries for a six-week period.

“The Nikon Festival represents the progressive nature of our brand in merging social media with innovative products as a way to engage and empower aspiring photographers and filmmakers,” said Lisa Baxt, Senior Communications Manager for Nikon Inc. "Nikon is committed to advancing HD video with the D5000 and other products and supporting it with an integrated marketing program that has a strong impact and is viral in nature. As part of this campaign, the festival presents the opportunity for current and future Nikon customers to tell their story with HD video.”

Nikon has also enlisted influencers from TV, photography and social media to serve as official Festival judges. Each will also share personal videos shot with a Nikon D-SLR camera, including actor/writer Rainn Wilson, Internet personality Justine Ezarik (iJustine), and visionary photographer Chase Jarvis. The Nikon Festival entries will be judged in December and winners will be announced in January.