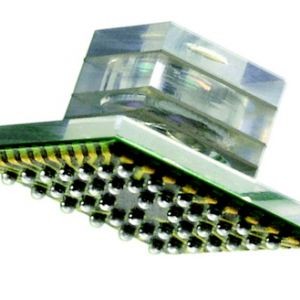 Of the many new and interesting announcements made at the 2010 PMA, perhaps none will have quite as dramatic an impact on the industry as the presentation Liam Goudge of Tessera made at the InfoTrends breakfast on the second day of the show.

Tessera's wafer-level camera technology (WLC) appears ready to make a big splash in the camera phone market—and perhaps beyond. The company announced development of the technology about two years ago and, according to Goudge, the mobile imaging world will begin feeling a major impact before the end of this year.

“Along with the advancements this technology can be responsible for in the camera phone market, it can also be responsible for opportunities in entirely new categories,” began Goudge, who is Tessera's Senior Vice President and General Manager. “Our vision is that image capture becomes ubiquitous. Cameras can be embedded in TVs, Web books, gaming devices and even children's toys. The sky is the limit.”

Goudge had given a similar presentation at last year's 6Sight Conference in Monterey, Calif., as momentum for WLC tech continues to grow.

The technology Tessera produces is essentially all about applying semiconductor processes and techniques to the optics industry. The wafer-level-manufacturing approach basically allows the company to simultaneously manufacture thousands of lenses on a single wafer compared with traditional optics manufacturing, which is limited to small volumes. In addition, the process allows for an increased number of lenses per wafer as sensor size decreases, which helps to reduce manufacturing and development costs and enables a true chip-size camera module that designers can assemble directly on the board using standard reflow processes.

Tessera is not the only manufacturer dabbling in wafer-level technology as companies such as Aptina Imaging, Nemotek, Kaleido Tech and SUSS MicroTec among others are also in this game to varying degrees.

While no one is saying these optics will produce image quality at the level of a DSLR, we are told the quality level can currently exceed the 6MP range—and that's not saying there's a limit. The other interesting part of this equation is the fact the technology will allow manufacturers to place cameras in a wider range of devices due to the fact it drastically reduces the size and total bill of material cost of camera modules.

“Consumers will always turn to a good quality camera when they want to capture an important memory like a special event,” explained Stan Jervis, a mobile industry blogger. “But consumers today are more into capturing disposable memories to post online or share wirelessly. It's like, hey, this is happening to me right now and I want you to check it out. This technology speaks directly and extremely effectively to that trend.”

Reflowable WLCs will certainly play a major role in the future mobile phone camera market. It will dramatically change the supply chain. It makes sense, however, to focus on the low-resolution camera markets first, and not try to implement WLC megapixel technology too early. These first steps will be small but the tech has far reaching possibilities.

“This isn't as much about quality as it is about ubiquity,” added Jervis. “While the quality level can reach a very adequate point, this technology is about the ability to produce a very good camera module inexpensively that can go in just about anything. It opens up some amazing markets…many we're not even thinking about yet.”

To get an idea of how far the technology behind camera miniaturization has come, Goudge likes to relay a telling story.

“I saw a demonstration at Carnegie Mellon University where a professor was doing something called Bug Cam with a bunch of cockroaches scrambling around with tiny cameras on their backs,” he recalled. “Unfortunately, the cameras weren't that tiny as he had to use those large Madagascar roaches. So my vision is that I'd like to do better than that with WLC. We can graduate to ladybug cameras.”