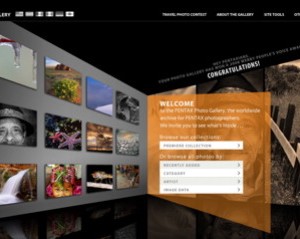 The global Web community has voted  Pentax Photo Gallery as Best Use of Photography of the year in a website in the Webby People57’s Voice Awards. The site is the singular vision of Ned Bunnell, president, PENTAX Imaging Company, and a passionate photographer in his own right.  The PENTAX Photo Gallery was produced and is managed by a team of PENTAX professionals and the web design firm texturemedia of Boulder, Colorado.

This year, nearly 500,000 votes were cast by people around the world for their favorite sites, videos, and ads in The Webby People57;s Voice Awards presented by Nokia. A full list of both Webby Awards and People57’s Voice Awards winners can be found here.

Winners will be honored at two star-studded ceremonies in New York City: The Webby Film & Video Awards on June 9th and The 12th Annual Webby Awards Gala on June 10.

“For decades, Pentax collected the best images captured by photographers with our cameras and published the work annually in an historical, coffee table-type, book collection,” said Ned Bunnell. “We went in a new direction creating the Pentax Photo Gallery to offer 24/7/365 virtual access to the best photography captured by Pentaxians around the world. This nomination honors the Pentax photographers.”