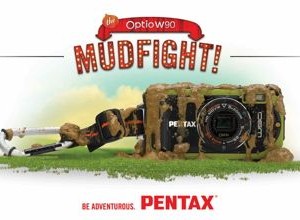 Need to reward a trail bud for finishing that grueling ride last weekend, or just feel like giving your ex a mud makeover?  Maybe, Pentax can help.

The company recently announced he launch of the Pentax Optio W90 Mudfight  Challenge. Centered around the company's award winning waterproof camera, the Mudfight Challenge App dares Facebookers around the globe to test their skills at a brand new sport – virtual mud throwing.

Participants may visit the Facebook app and muck it up with Facebook friends, family, or those pesky frenemies. Facebookers who play may become eligible to win a $400 American Express gift card. Participation is limited to current Facebook members. Sign-up is free at www.facebook.com.

Pentax explains that the Mudfight Challenge is easy to play. Once loaded, the App randomly helps players select five Facebook friends. Next, users access a computer mouse to target the crosshair aim as friends pop up randomly.  Every hit drives up the score and helps players ascend to higher levels of play while top scores are recorded on a leaderboard. Facebookers are entered into the sweepstakes each time they play (up to 50 times per day).

Covered in questionable substances from the start, the Pentax Optio W90 mud obsession originated to communicate the adventure-proof features of the camera. The App is one of several consumer marketing initiatives to promote the adventurous camera in the midst of a global media shift from traditional to digital and social. Pentax Imaging launched www.facebook.com/pentax about one year ago.  More than 20,000 (and growing) facebookers indicate they “like” the site on the home page.

“There is no longer one right way to engage consumers,” said Ned Bunnell, president, Pentax Imaging Company.  “This comprehensive campaign, designed by The1stMovement, our recently selected digital advertising agency of record, uses a combination of interactive and social media components to help us build stronger relationships with more customers.”

“Providing engagement with the PENTAX brand through a social media game is a natural extension of the Optio W90 initiative,” said Ann Van Orsdel, president of The1stMovement. “Reaching our audience where they spend their time, helps reinforce our product message and key benefits in a way that is both fun and relevant.”

Along with Mudfight, Pentax and The1stMovement recently unveiled “The Most Adventurous Friend You Know” campaign for the Optio W90 that encompasses:

·  Home page animated flash enhancements to www.pentaximaging.com to communicate the features of the Optio W90 and all of the latest PENTAX digital cameras.

·  Digital and traditional billboards and train wraps posted in downtown Minneapolis near the TWINS Stadium on the cusp of the holiday shopping season.

·  Targeted online integrated, taunting rich media banner ads that feature the Optio W90 as “THE MOST ADVENTUROUS FRIEND YOU KNOW” encouraging viewers to create an adventure of their own and step outside their comfort zone.

· The leveraging of a variety of social media advertisements and a targeted pay-per-click campaign.