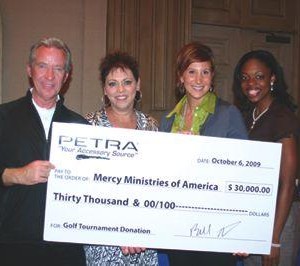 Petra Industries’ annual charity golf tournament raised $60,000 when it was held Oct. 5 and 6, the company announced this week. The tournament, held for the 11th year, raised $30,000 each for the Mercy Ministries of America and Whiz Kids.

The event included a cocktail reception and poker tournament on the 5th, and a golf scramble at the Gaillardia Country Club in Oklahoma City. An awards luncheon was held after the round.

"Our charity golf tournament has always been a huge success, and we’re proud to say that this year was no exception, generating $60,000 in donations for our two charities," Bill Stewart, President/CEO of Petra Industries, said as part of the announcement.

"Events such as this are only possible through the participation and sponsorship of generous individuals and organizations.  Taking part in the tournament allows participants to both contribute to a charitable effort and network with business associates.  We look forward to the continued growth of the event in years to come."