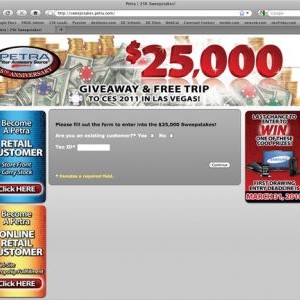 Petra Industries said Tuesday that only one week is left to register for the first prize giveaway its 25th Anniversary sweepstakes promotion.

The promotion, which was announced during International CES in January, will give away prizes on a quarterly basis throughout the year. The giveaways for the first quarter include a Samsung 1080p LCD TV, an Xbox 360 Elite, and a 32GB iPod Touch.

Petra will announce winners in April.

“This will be the first time we’ve done such a big giveaway in the history of our company and we’re very excited about our first quarter drawing,” Bill Stewart, Petra's president/CEO, said as part of the announcement.

“The great thing about it is that you don’t have to be a Petra customer to enter so we encourage everyone to sign up – it’s a chance to win free prizes and free money with no strings attached!”

For more on the sweepstakes, visit Petra's contest site.