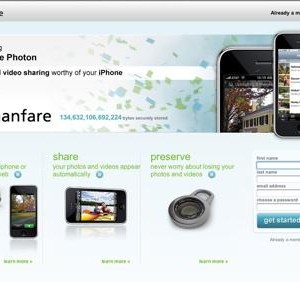 Phanfare recently introduced version 2.0 of Photon for the iPhone that enables the purchase of prints and enlargements of photos from any iPhone or iPod touch.

Phanfare claims they are, “the first to offer prints-by-mail from the iPhone. For the first time, the most common print sizes including 4×6, 5×7, 8×10, and poster size are available for purchase on Kodak paper from the iPhone in just a few taps.”

Phanfare explains that Photon transforms the iPhone into a connected digital camera. Every photo taken on the iPhone moves wirelessly up to Phanfare’s servers and every photo the consumer has even taken, whether on the iPhone or uploaded via the web, is available for viewing on the iPhone.

"We are hearing from more and more people that the iPhone has become their most frequently used digital camera. Offering printing from the iPhone rounds out the solution and unleashes photos from the small screen,” said Andrew Erlichson, Phanfare’s co-founder and CEO. "People like to show off their photos on their iPhone and often a friend or family member will request a copy. Now they can order high quality prints that can be shipped anywhere right from the iPhone in just a few taps."

Phanfare Photon is part of Phanfare’s full service photo and video sharing solution.  Phanfare users can also upload photos and videos from their computer, from Apple iPhoto, Google Picasa, Adobe LightRoom and Apple Aperture. Photos and videos can be shared via email, on the web, or pushed to Facebook. Phanfare securely stores over 130 terabytes of user data and serves over 400,000 people per month.

With Phanfare’s photofinishing service, Photon users can order prints from wallet-sized to as large as 20"x30" posters, all printed on Kodak paper. Phanfare Premium customers enjoy prices that are significantly lower than those offered by other major online photofinishers.