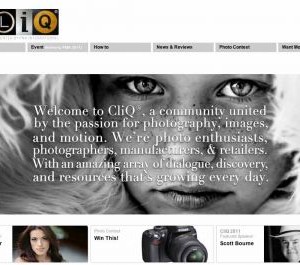 PMA has launched CliQ, which the group calls a new branded experience for photo enthusiasts and anyone interested in getting the most from photography and video.

“CliQ is a 24-hours-a-day, seven-days-a-week commitment on the part of the association to provide content and tools for everyone involved in photography, from consumers to aspiring pros, to retailers and professional labs,” Ted Fox, executive director and CEO of PMA, said as part of the announcement. “Also, with the recent addition of the Professional Wedding and Studio Photographers Association International (PWSPI) to the PMA family, the association has broadened its appeal to include all segments of the photo/video industry.”

The launch of the CliQ website, at cliqworld.com features how-to tips, new product reviews from DP Review, and monthly photo contests. In the coming months, more features will be added, leading up to the annual event in September.

Changes to the PMA
CliQ will bring extensive changes to the PMA 2011 annual convention as well, which is scheduled for Sept. 6-10 in Las Vegas. The expanded event is renamedCliQ 2011, and features presentations from well-known photographers like Jasmine Star, Scott Bourne, Tracey Clark andStacy Pearsall. Workshops, photo walks, and seminars will be part of the CliQ experience, along with entry to the world’s largest annual photo trade show.