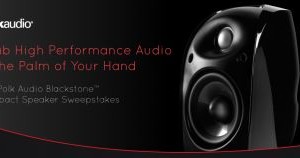 Polk Audio, the Speaker Specialists, is joining forces with our sister magazine E-Gear, the source for intelligent, insightful information on consumer electronics, to introduce the new Blackstone TL Series Compact Speakers through an exciting high profile sweepstakes that will award a total of nine performance home theater systems over the course of three drawings.

Winners will be announced on the Polk Audio and E-Gear web sites, as well as other sites under the NAPCO Publishing umbrella.

“The Blackstone Series represents a quantum leap forward in the development of compact speaker systems, so we feel it is appropriate to introduce it with fanfare,” said Al Ballard, Polk Audio’s Vice President of Marketing. “By teaming up with our friends at E-Gear, we’re spreading the word to an enormous audience that is eager to hear about the latest and greatest in audio products.”

“It’s always an event when Polk introduces a new product,” Maureen Jenson, editor in chief of E-Gear and CustomRetailer magazines, said. “The new Blackstone TL series typifies the company’s unshakable commitment to product innovation, performance and value. We’re thrilled to give our readers an opportunity to win one of these great new systems for themselves.”

Comprised of four TL2 satellite speakers and one TL2c center channel speaker, the Blackstone TL2 satellite/center channel system (SRP: $749.95) relies on advanced Time Lens Technology to align the acoustic centers of the tweeter and mid-bass drivers for superior imaging, while the acoustic lens incorporated in the grille smoothes the tweeter’s frequency response to achieve a balance not previously thought possible in small, satellite speakers.