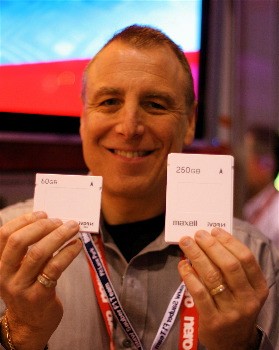 Portability was such a major theme at CES ‘08, you’d think that Americans stay in a state of permanent mobility. Vendors touted services, partnerships and new technology that will allow drivers to watch local TV broadcasts (this got more than a few laughs at an LG

press conference), vacationing parents to edit and upload videos while the kids are still drying off from the water slide, and movie-lovers to set up personal mini-cinemas on the airplane, the roof deck, or the beach.

Take Maxell’s new offering for 2008, iVDRS, a class of portable hard drives the size and shape of game cartridges that suddenly make 250 gigs of memory seem as ubiquitous as an umbrella. “We’d like to see people take this on vacation with them,” said Maxell’s Rich D’Ambrige. “The hard drives on camcorders fill up. We don’t want you to be out of

Meanwhile, Sony introduced a mobile speaker system called the Rolly, “a new concept in sound entertainment,” which turns a music player into a dancing (literally…the device actually choreographs its movements to the rhythms of a song) baby boombox.

The recently sold and re-invented company iRiver has full line of “ultra portable” personal media players and, predictably hot, hand-held GPS devices. iRiver’s Owen Kwon says he’s seeing Americans very willing to pack their bags with an array of mobile devices. “They just want things that are very easy to use,” says Kwon. “They prefer a mobile device that gets the job done to a convergent device they can’t appreciate all the features of…Our customers are enthusiastic about portable devices that do two or three functions very well.”