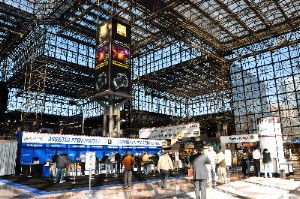 For the second week in a row we are taking a look at what/who made news from the show floor at New York’s Photo Plus Expo held late last month. While we mentioned last week that some had suggested attendance might have been a bit light in the early going of the event, show representatives peg the total attendance at over 27,000, which they say actually bests last year’s figure by a few hundred. That’s good news and a trend we hope continues at some of the bigger imaging-related gatherings set for early 2009.

As for news from the trenches…

Like most professional photographers in America right now, Mark Bute is scrambling. The Lancaster, PA, wedding and portrait specialist is seeing his business shrink at an alarming rate, not only because people are asking their friends-with-DSLRs to do the shooting, but because even willing clients are scared to drop cash during a recession.

Bute spent the last week of October in New York, at the PhotoPlus Expo, an annual pro show where manufacturers, imaging service providers and retailers were all on hand to help him brainstorm about ways to stay in business no matter what happens in 2009.

“It’s very competitive out there right now,” said Bute, stopping on the show floor a moment to reflect on the imaging industry as a whole. “But preserving memories and moments, especially journalistic photography, will always be a necessity.”

For Bute, marketing that sentiment means partnering with his local photo shop, Ritz Camera, to set up a co-branded website where Bute’s customers can view his albums of senior portraits or formal events and order their own prints directly through the store.

“That gets me out of the loop and frees me up to be out shooting more,” he said. “That’s where the money is for me.”

Those sort of partnerships are good for everyone, especially CE and specialty imaging retailers who are righteously discouraged about the dearth of foot traffic they are seeing in Q4.

Distributor Doug Pircher, general manager of International Supplies (based in Inglewood, CA), had practical ideas as well as a dose of tough love for the retailers he was encountering at PhotoPlus.

“I think the economy will be in the tank for much of 2009,” he said. “Dealers are going to have to get innovative about getting people into the store…They need a kick in the pants, frankly.”

Why for instance, Pircher wanted to know, aren’t dealers courting the business of all the local professional photogs in their markets at Professional Photographers of America chapter events? Why are dealer websites still “weak” in an online age? Why aren’t dealers doing everything they can to host online and in-store teaching events when the public is so hungry to learn digital photography right now?

He had some answers to those provocative questions at his own booth, like a service he’s sponsoring called Digital 1 to 1. Based in L.A., this new business produces short web movies, 2-4 minutes long, about the basics of digital photography. Retailers can buy a yearly subscription (starting about $400/year) to the pods, offering their customers an online opportunity to learn about topics like white balancing or changing ISO levels or shooting sports. (To see the service in action, check out www.Nelsonphotosupply.com.)

A couple showfloor rows over, another rookie service called ScanDigital.com was offering a 15% revenue share to any retailers who wanted to offer their customers premium flatbed scanning for old photographs or the ability to digitize old video tapes.

“This is great for customers who aren’t internet savvy,” said ScanDigital.com founder and CEO, Anderson Schoenrock. “And for people who are feeling more cash strapped, we’re looking for easy ways to let them send photos in over, say, 6 months, instead of one lump sum. It’s an easy service to add as a retailer, and it helps them get people in the store…some dealers even do ‘Heritage Making’ workshops to show people the urgency of preserving old photos.”

Hardware companies exhibiting at the PhotoPlus Expo had their own ideas for giving retailers a hand over the next many months. Fujifilm reps were showing brand new SD and SDHC cards, up to 16 gigs, that they said would provide an easy name-brand high-margin bundling opportunity at camera counters. They also had an answer to the demise of Polaroid’s instant film camera business, a remarkably low-tech but trendy camera called the Instax 200, available in the U.S. by the end of the year for around $50.

“Imaging will continue to be a strong category, don’t worry,” said Fujifilm’s Jim Calverly. “It’s still a great year for a consumer to buy a camera and the pictures from small cameras look better than ever.”

Casio was showing the latest generation of its ultra high-speed burst mode phenom, the EX-FH20, which is hitting the market with a stunning price drop, $400 less than the intro high-speed camera model (EX-F1) which sold this year, mostly to enthusiasts, for $999.99. But it’s not just the more affordable price tag that Casio is hoping will give retailers a lift. The new EX-FH20 is loaded with a 30-second video ad in its internal memory. That means when a customer picks up the camera for an in-store test-run, they’ll see a flashy, on-point sales pitch on the display as soon as they turn it on. (The camera comes with instructions on how to delete the ad as soon as the camera is yours.)

“Don’t Miss the Action” is Casio’s tag line for the new camera, and that sentiment was echoed around the PhotoPlus show floor as professionals and imaging business reps alike teamed up to scheme together about surviving, even profiting, despite the daunting 2009 consumer spending forecast.

Mark Bute may have said it best: “I’m just going to have to look for new ways to work.”

Elsewhere around the show floor..

Always interesting to hear about and actually see new film product and no better place to do that than at this show. Kodak’s new Ektar 100 with ISO 100 speed, high saturation and “ultra-vivid color,” they tell us, offers “the finest, smoothest grain of any color negative film available today.” EKTAR 100 Film is said to be the ideal choice for commercial photographers and advanced amateurs for applications such as nature, travel, fashion and product photography, where the emphasis is often on color. Kodak explained that the new film incorporates Kodak Vision Motion Picture Film technology to achieve it’s the fine grain.

Storage was yet another big topic of conversation at the show and Western Digital announced that they have added a high-speed FireWire(R) 800 interface to their popular My Passport Studio portable drive line to give Mac computer users and creative professionals the fast performance they need. “The new interface also makes this drive a perfect storage companion for the newly introduced Apple MacBook Pro computer.” With FireWire 800/400 and USB interfaces, the new My Passport Studio portable drives offer up to 500 GB of storage capacity, are formatted for Mac computers and weigh less than 7 ounces.

“Photographers and videographers, be they creative pros or Mac computer enthusiasts, have a genuine need for large amounts of fast, portable storage for their high-definition files,” said Jim Welsh, senior vice president and general manager of WD’s Branded Products and Consumer Electronics Groups. “With a new FireWire 800 interface, My Passport Studio speeds up editing and transferring of big media files making it perfect for performance-minded Mac computer users on the go.”