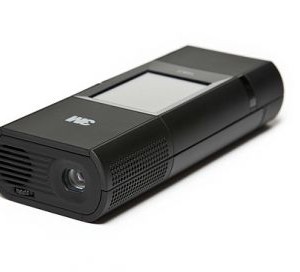 The organizers of the PEPCOM tabletop tech events were at it again last week in New York with their 2010 pre-Holiday edition. Under the curious theme of 1980’s era toys (huh?) over 75 exhibitors offered up a peek at some of the cool “new century” toys that should play red hot this coming holiday season.

We’ll focus on the imaging world here as there was plenty of news in the capture, sharing and storage categories to look forward to in Q4.

Kodak has also added a 10-inch model to their Pulse digital frame line – a digi frame that allows the user to create an e-mail address for the frame so images can constantly be updated on the fly.

3M’s latest Pico Projectors now include a model called the Shoot ‘n Share –  a mini projector that also captures 720p video as 60 fps. Captured video can be viewed on the spot with the unit’s built-in 15-lumen LCOS projector, which can project still or moving images at sizes from 6 to 65 inches.

Nikon was proudly showcasing their new D7000 that features a new 16.2-megapixel CMOS sensor with low-light ability, “never before seen in a DX-format (APS-C) camera,” they were excited to proclaim.  Nikon added that the new EXPEED 2 image-processing engine fuels the enhanced performance of the D7000 along with a new 39-point AF system and the new 2,016 pixel RGB 3D Matrix Metering System. All this combines to deliver, “amazing image quality in a variety of shooting conditions.”

Samsung had their new NX100 at the show – the follow-up to the NX10 , featuring the same APS-C size sensor and 3-inch AMOLED screen for clear and easy viewing. The company claims they have taken the “mirrorless camera to the next level” with the NX100, by designing a slim, sleek and stylish body  and adding the intuitive i-Function lens which allows users to control their camera through the lens for the first time. The NX100 also boasts a fast AF as well as an ISO that is raised to a maximum of 6400 for action shots.

Imation’s new Imation Link projects audio and high-definition video content, Internet TV, movies, photos, computer games and even business presentations to a television or projector without the hassle of tangled cords or cables. Imation explained that unlike any other wireless-sharing solution, the PC- and Mac-compatible device supports high-definition video (up to 720p), high-resolution photos (up to 1080p) and stereo audio. The Link's sleek design includes an attractive, fin-shaped receiver in glossy black that connects to your TV or conference room projector using HDMI or VGA input.

Kingston’s claims it’s new Data Traveler Ultimate 3.0 has a speed of 80MB/sec and a write speed of 60MB/sec along with 16GB, 32GB and 64GB memory capacities. The company was touting the fact that during internal testing a 1 hour 44 minute movie (3.9GB) was written to the drive in 1 minute 13 seconds and a 2 hour 23 minute DVD (4.4GB) transferred to the drive at a fast 1 minute 23 seconds.

SanDisk demo’d their Sansa Fuze+ portable media player – that works with every major audio, video and music format, the device features a 2.4 inch screen. The Sansa Fuze+ is a successor to the original Sansa Fuze and has added a revamped GUI.  The player comes in 4GB, 8GB and 16GB denominations, costing $79, $89 and $119, respectively.

Sony unveiled a new camera specifically designed for fast photo uploads to the blogosphere. The Bloggie Touch, which can shoot 12.8-megapixel photos and MP4 video, also sports a three-inch touch screen, and makes it easy to upload and edit photos. Coming in October, the Bloggie Touch will retail for $180 and $200 for the 4GB and 8GB versions.

“We started from the ground up to develop a new system of hardware, software and seamless integration with social network services for an easy, intuitive shooting and sharing experience that anyone can enjoy,” explained Andy Bubala, director of Sony's camcorder business.