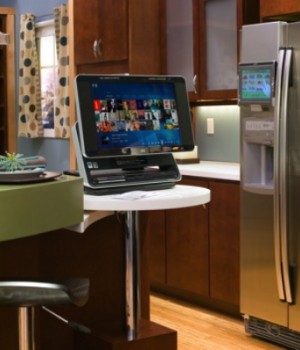 With both LG and Samsung showing flat panels nestled in the doors of refrigerators and hinting at other IP-addressable appliances to come, kitchen designers and retailers at the 2007 Kitchen Bath Industry Show in Las Vegas last month are asking a very practical question: how do customers/clients really want to use technology in their kitchens?

According to Tim Woods, an “ecosystem development” consultant who’s working with a manufacturer research group called the Internet Home Alliance, the answer to that may be quite different than the industry expects. “People love broadband in the kitchen,” he says, “but not for the reasons manufacturers originally thought. People don’t want to scan barcodes or keep (an internet record) of what’s in their fridge. They want to use the kitchen as a control center for the family.”

Woods says research shows people like to have wireless computers in the kitchen to check for weather reports and school closings. They also respond favorably to touch-screen computers with family calendar functions. “The best part of our findings is that what people want can be done today,” says Woods. “It’s not a concept kitchen, it’s possible right now.”

Proof of that plausibility was on display in the South Hall of the Las Vegas Convention Center this week, where manufacturers such as HP, Whirlpool, Panasonic, and Exceptional Innovation built a model of a smarthome-style kitchen, complete with a touch-screen wireless computer (HP’s Touchsmart IQ77), a home automation control center, even a “recipe projection system.”

Manufacturer reps said the model kitchen is an example of how Americans might really want kitchen tech applications.