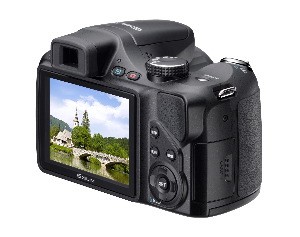 I don’t know whether it’s the kid or the masochist in me, but I have always loved watching things explode. Water balloons, bottle rockets, science experiments gone awry, pop rocks on the tongue…they all give me that uncorking-the-champagne rush. I even like a good sneeze. Unfortunately, these loaded moments rarely make the photo album. Wouldn’t it be cool to mix up your collection of typical portrait and vacation shots with edge-of-your-seat action shots like the exact moment the bat crashed into the home run ball or the very instant the piñata ruptured? Finally, we have a more affordable camera here that can do the high-speed capture job, in both still and video images, the new Casio EX-FH20 ($599.00).

Casio made news in early 2008 by creating a new consumer camera category: the bridge-style (somewhere inbetween a point-and-shoot and a D-SLR in quality) high-speed digicam. That first offering, the EX-FH1, was a CES hotshot. The tech media went crazy for a camera that could capture 1,200 frames per second in video mode, creating highly-dramatic slow-motion video that made any old jump look like a bullet-dodging sequence from The Matrix. The F1’s still-photography modes could get detailed, high-res shots of a bird’s wings in motion. It was just cool. It was also bulky, heavy, and it cost a grand. I don’t know about you, but this consumer wasn’t going to shell out enough cash to buy a D-SLR with lens just for a novelty cam.

So Casio engineers kept working on their design for this coup of a chipset, and by the end of the year, they’d come up with this 28% lighter, 27% smaller and most importantly, $400 cheaper version, the FH20. (The F1 remains on the market too…Casio reps say enthusiasts like nature photographers, scientists, and golf pros are still into it.) And they added another killer feature hoping to lure parents into the Casio fold, a 20x optical zoom, perfect for sporting events.

At a FH20 kickoff event in New York City, Casio hired NHL Hall-of-Famer Glenn Anderson to take some shots on goal at the Chelsea Piers Sky Rink with over a dozen tripoded FH20s nearby. I stepped up to the camera, ultra-zoomed right into the goalie’s skates, switched the control dial to still-photo burst-mode and waited. Right when I saw Glenn ready his slap shot, I hit the shutter button and, in a flash, had captured an intricate record of the puck’s lightning journey past the goalie’s stick dead into the net. The camera whirred like the fierce little machine it is, and in playback mode, let me choose which of 40 photographs would best represent the actual goal moment. The FH20 menu prompted me to save just the shot I wanted and delete the slop. Caught, picked and saved in 5 seconds! I had a little rush like sports shooters must get when they capture the apex of an Alley Oop.

Some practical notes: the FH20 uses four AA batteries and it can suck those babies dry quick, so I learned to carry spare lithiums with me when I took the cam on trips. It has a SD/SDHC card slot, but the memory on a 1 or 2 gig card is used up so fast, especially when shooting HD video (you can squeeze about 4 minutes on a 1 gig card) that I recommend the slightly more expensive SDHC (for “high capacity”) cards, at least 4G if you can swing it. This camera is built for easy laptop accesss with a USB/AV port that’s perfect for transferring your heroic super-slow-mo video. I find the mode-control dial on the top of the camera to be stiff. The most interesting feature on the camera’s backside, just to the right of its 3-inch LCD, is a button marked, swear to God, “BS.” (It stands for “Best Shot,” Casio’s attempt to help you identify the least noisy/blurry photo in a set.) I kind of love those lost-in-translation engineering moments.