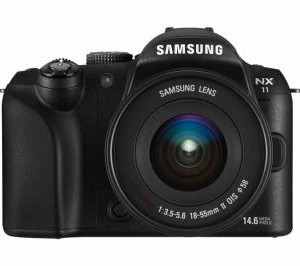 Some of the products to be unveiled this week at International CES in Las Vegas:

Samsung Launches New Cameras
On the eve of the  2011 Consumer Electronics Show, Samsung has  announced the newest addition to its NX line of mirrorless interchangeable-lens cameras—the NX11—along with the WB700, an ultra-slim model featuring a 24x zoom function. The company also announced a new camcorder, the HMX-Q10, designed to highlight Samsung’s full HD camcorder technology with a BSI CMOS sensor.

The i-Function lens was developed to put the “perfect picture at the fingertips of all photographers by providing an exceptionally easy way of controlling the camera.” Since camera users typically wrap one hand around the lens when holding a camera, the new i-Function system allows photographers to naturally use their left hand to change the camera’s settings via a button built into the i-Function lens, without needing to take the camera off the target. Users can toggle between shutter speed, aperture, EV, WB and ISO by using the i-Function button or ring on the lens, for quicker configurations while shooting.

Other key features include: a built-in flash; a built-in electronic VGA (640×480) viewfinder; a 3.0-inch AMOLED screen designed to reduce glare from sunlight; 720p HD recording; a hot shoe; smart auto mode; and beauty shot. Samsung’s NX11 will ship in February with an MSRP of $649 for the camera body and bundled zoom lens.

The HMX-Q10 camcorder combines the world’s first Switch Grip with Easy Operation via an LCD screen. The Switch Grip means that no matter how the camcorder is held, the G-magnetic sensor inside the HMX-Q10 recognizes the angle and turns the LCD display so it’s easy to see, and controls recording easily from any angle. Easy Operation means that users can control detailed processes, turn the camcorder on and off and operate the playback function easily through the LCD screen, so controlling the device is intuitive and fuss-free, and viewing footage is as easy as capturing it.

Parrot Intros the DIA Frame
Parrot will introduce their latest digital photo frame: DIA, a frame they playfully describe as a mysterious object developed in collaboration with Jean-Louis Frechin, founder of nodesign agency.

DIA Parrot by nodesign is a white rectangle, very simple, with tactile buttons and a trackball to surf in the menu of the frame. What Parrot explains as most striking about the product is its 10×4 inch high resolution screen. Dismantled, deconstructed, disconnected from the frame as if there was nothing behind, this screen is transparency, is light. The images, they explain, appear through this “light box” in a brand new aesthetic dimension.

DIA uses the Google Android operating system to connect to the Internet and the two USB ports enable connection of a keyboard and a mouse to the frame as well. The frame also offers comprehensive connectivity (USB, SD, Wi-Fi, Bluetooth), Wi-Fi and Bluetooth connections to transfer photos from almost any digital devices: PC, Mac® and mobile phone. The slots for SD card and USB port enable to increase the memory available in the frame.

Disaster Proof Portable Drive
International Supplies announced they will be distributing Silicon Power’s new Armor A80 portable drive that they claim is practically disaster-proof.  The Armor A80 is a 2.5” portable hard drive that is waterproof, shockproof, pressure & vibration proof and dust-proof. Meeting U.S. Military Spec Standards, the Armor A80 is as rugged as you can get. It can be fully submerged in up to three feet of water for thirty minutes, survive a freefall from four feet onto concrete, and is not susceptible to those unexpected vibrations or hits that would typically incapacitate most hard drives.

“Silicon Power’s Armor A80 is a professional’s dream come true in regards to portable hard drives,” says Doug Pircher, general manager of International Supplies. “When you are on the go all the time, you want your gadgets to be able to take a beating and still work, which is why professionals will love the Armor A80. It is durable, reliable, compact, sleek, portable, easy-to-use.”

The Armor A80 is designed to work with USB 3.0 allowing a transfer rate of five gigabits per second (Gb/s) – 10 times faster than USB 2.0, but for today’s computers, the A80 is also fully compatible with existing USB 2.0 connections. Until USB 3.0 is more readily available, users who desire a faster transfer speed than USB 2.0 may upgrade their laptop to up to five Gb/s using either an ExpressCard adaptor or a PCIe card.

Bushel Full of Digicams from Fuji
Fujifilm is taking advantage of the CES spotlight to announce a bevy of new digital cameras.

Fujifilm explains that the FinePix XP20 and XP30 are the perfect cameras for active families on the go that want a camera they can take anywhere without worrying about rain, mud, snow or sand; even the occasional drop or bump.  The new XP20 and XP30 have improved their “life-proofness” – waterproof (5M/16.5ft.), shockproof (1.5M/5ft.), freezeproof (-10°C/14°F) and dustproof.

The Fujifilm FinePix HS20EXR is a high quality, high function camera for the professional or enthusiast photographer. It features a new 16 megapixel EXR-CMOS sensor, powerful Fujinon 30x manual optical zoom (24mm-720mm equivalent), and a tilting 3.0″ high contrast LCD with a electronic viewfinder featuring a “heads up” sensor that automatically changes from LCD to EVF when the camera is raised to your eye for shooting.

“The professional photography industry is at a point where digital photo- and video-capture methods are converging, meaning that professional shooters need a memory solution with the versatility and reliability to safely store both photos and videos,” said Pachi Chen-Wong, senior product marketing manager, Lexar Media. “The 64GB and 128GB Lexar Professional 133x SDXC cards combine high-speed performance with large capacities to offer solutions for professionals who shoot large volumes of high-resolution images and HD video.”

The Lexar Professional 133x SDXC memory cards are compatible with all SDXC-enabled devices. The cards include the latest version of award-winning Image Rescue software to help recover lost or deleted photo and video files. Professional photographers can now capture, store, and manage more of the photo and video content critical to their livelihoods.