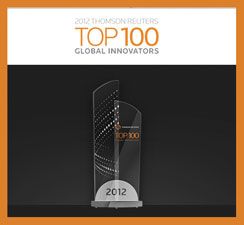 Milpitas, CA—SanDisk Corporation received the Thomson Reuters 2012 Top 100 Global Innovator Award, recognizing it as one of the most innovative companies in the world for the second consecutive year. The award, part of an initiative of the IP Solutions business of Thomson Reuters, honors corporations and institutions that are at the heart of innovation as measured by a series of proprietary patent-related metrics.

“I am pleased that SanDisk has again been recognized by Thomson Reuters as a global leader in innovation and intellectual property,” said Eric Whitaker, senior vice president and chief legal officer, SanDisk. “Over the past 25 years, SanDisk’s inventions have paved the way for today’s digital lifestyle and our engineers continue to innovate on technologies that will enable the next generation of products.”

SanDisk’s flash memory technology can be found in many of the world’s largest data centers, in products from top electronics companies, and at approximately 250,000 retail stores across the globe.

“Innovation is the foundation for economic prosperity and technological advancement,” said David Brown, managing director, Thomson Reuters IP Solutions. “We congratulate SanDisk and its leaders for their important role in global innovation.”