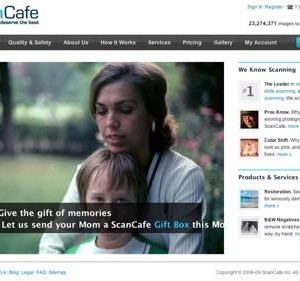 ScanCafe recently announced the appointment of Henry Wilhelm to the company’s advisory board. As a board member, Wilhelm, the world’s leading authority on the permanence and preservation of traditional and digital color photographs, will offer professional counsel on photographic image permanence and photo archiving, joining the popular online service in its commitment to the long-term preservation of family photographic history.

“I’ve spent more than 50 years helping preserve photographs of all kinds,” said Henry Wilhelm, President and Director of Research at Wilhelm Imaging Research, Inc. “The transition from the traditional silver-halide analog photography of film and prints to digital cameras, files, and printers is the most far-reaching change in the more than 150-year history of photography. As imaging technology evolves, our research continues to expand and now includes both short-term and long-term digital file preservation issues.”

Wilhelm continued, “I’ve been impressed by ScanCafe’s methodical approach to scanning and digital restoration of both B&W and color negatives, slides, and prints. The time and care their technicians devote to color correction and digital repair of scratches, tears, and other physical damage for each image is impressive. I look forward to working with ScanCafe on long-term digital preservation strategies as well as on the preservation of valued photographic prints, negatives, and slides. We need to preserve it all!”

Wilhelm, a leading expert on the preservation of various imaging mediums from color prints, negatives and slides to motion pictures, has advised the Museum of Modern Art in New York, Academy Award-winning filmmaker Martin Scorsese, and many commercial and private photography collections.

He serves as a consultant to Corbis on high-security sub-zero cold storage facilities for the long-term preservation of the Corbis-Bettmann Archive in the United States, and the Corbis-Sygma photography collection in France. Early in his career, Wilhelm was an assistant to Ansel Adams in a photography workshop at Yosemite National Park, where discussions with Adams increased Wilhelm’s interest in the long-term preservation of photographs.