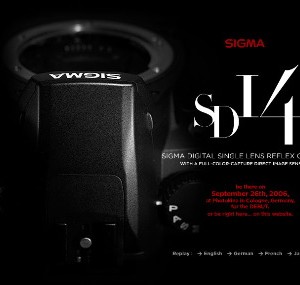 Making an already fascinating DSLR market even more interesting, we have learned that Sigma will be making an announcement at Photokina as to their latest entry into this suddenly explosive market. From what we can cull from the Sigma teaser Web site at www.sigma-SD14.com, the Foveon X3 sensor technology is back – perhaps with a few new wrinkles as the site references the chip made famous in Sigma’s previous SD-9 and SD-10 models.

For those of you that may not be familiar with Foveon’s X3 technology, this latest iteration is now called the Full Color Capture Direct Image Sensor. First introduced in the Sigma SD-9 digital SLR in 2002, this groundbreaking sensor uses a special layered-grid technology that separates the three primary colors offering, what we are told, is significantly higher resolution and color clarity.

We are also told the new model design in the SD-14 will be much more in line with many of the DSLRs we are seeing on the market today – with a lightweight, more compact form factor. We have also learned of a few new features that improve upon the previous SD models greatly, not the least of which is a new menu operation that significantly simplifies the camera in terms of ease-of-use – and that plays quite nicely into the new audience this market is attracting – a younger, less photographically-savvy crowd.

As for the aforementioned Sigma Web site, the company poses several questions to visitors that they claim will be answered at the time of the September 26th launch, including: “You believe that all digital cameras capture all colors?”; “You’re satisfied with a sensor that detects one color per pixel?”; “If you could have fundamentally better technology, would you settle for added, improved functions instead?” The flash animation then ends by stating, “The truth will soon be revealed…” We’ll look forward to reporting on that “truth” from Photokina later this month.