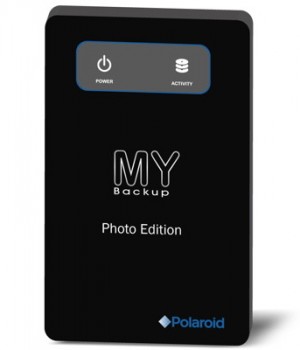 While they decided to sit out this year’s PMA – as they have for the last few years – Polaroid is still producing some interesting product for the photo market. The company recently launched a new media backup device that enables consumers to back up photos from their personal computer by simply plugging the device into the computer’s USB port. The portable drive instantly searches the computer for all digital images and copies them over to the device, as the company explains, “without having to install or configure any software or even clicking a mouse, an industry first.”

Using what Polaroid is referring to their own “ClickFree technology”, the back-up device, “ensures a secure and easy process that eliminates the frustration of digital photo backup, making it ideal for all end users including those with little computer knowledge.” At a time when image storage is becoming a major issue for consumers the promises Polaroid is making around this device are certainly timely.

“Photo backup is not being performed by many consumers mainly due to apprehension or frustration of using existing external backup devices,” says Jon Pollock, Vice President and General Manager of Product Planning and New Technology at Polaroid. “This is truly a groundbreaking product and user experience. It is so simple to use that we know consumers will finally be backing up photos on a regular basis.”

The company just launched the product after a CES 2007 debut. The device contains a 2.5-inch hard drive that will hold up to 40,000 photos. In addition to backing up photos, the device has several convenient features such as online sharing and printing of photos via Internet-based services. We’ll have a complete review in a future issue of Picture Business. The unit is priced at around $120 for a 40GB version.