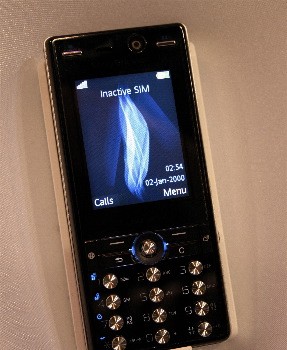 Cameras, from the low-cost VGA to the now-standard 1.3 megapixel models, seemed almost a second thought in the new handsets featured at this year’s CTIA Wireless conference…taking a back seat to advanced GPS features and iphone-inspired touch screens. The big news in mobile photography was mostly about in-camera editing software that allows you to crop and remove red-eye from shots before beaming them directly to your blog or to a friend.

Still, one premium cameraphone stood out: Sony Ericsson’s K810 Cyber-shot, a 3.2 megapixel candybar that has so many point-and-shoot features, it’s virtually indistinguishable from a camera on its backside. The black and silver handset, expected out later this year, will likely sell for over $500, and for highbrow reasons: it sports a Xenon flash with red-eye reduction, a self-timer, photoediting software, Picture blogging features, and autofocus. It’s shiny, diamondy circular number buttons are swanky too.

Those buttons have a dual purpose. Number 7, for example, is a shortcut for a timer when the phone is in camera mode. Another button activates “macro.” Sony Ericsson dubuted other more affordable Cyber-shot phones, like the $299 K550 2-megapixel unit, but the K810 was such a progressive product for them, they actually created a tripod accessory for it, the tiny IPK 100, which they say will cost well under $50.

Look for a full report of the camera phone market in the May issue of Picture Business.