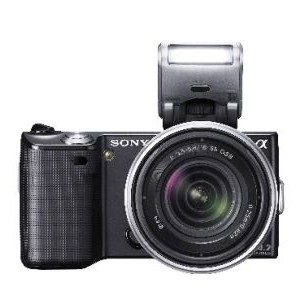 After teasing the press at this year’s PMA, Sony has now officially released their new line of mirrorless, interchangeable-lens compact cameras under the NEX Generation title.

The NEX-3 and NEX-5 are extremely small interchangeable lens cameras that contain Sony’s Exmor APS-C sized sensor, the same sensor used in most DSLRs. The system was also introduced with several new lenses, also much more compact in design than typical DSLR lenses.

Sony has also announced a new AVCHD  HD camcorder line, featuring an interchangeable lens system that will be available this fall. With a compatible mount, the lenses from the NEX still cameras will work with the new camcorder. The camcorder will use the same Exmor APS sensor used in the NEX cameras.

Both the NEX-3 and NEX-5 offer 14.6MP resolution with the latter offering the ability to shoot video at 1080i while the former handles video at 720p. The NEX-5 also has a slightly smaller, magnesium body but those are just about the only differences between the two models.

“Consumers want better picture quality in a smaller form factor. Sony has made that a reality with these cameras. The NEX-5 and NEX-3 cameras truly embody Sony's make.believe spirit,”  Kristen Elder, director of Sony's alpha digital imaging business, said as part of the announcement. “These new cameras are the game-changers everyone has been waiting for and will revolutionize the consumer experience by offering outstanding picture quality with a totally pocketable size.”

The LCD is a 3-inch, 900,000 pixel and offers the flip out and twist design. Due to the ultra-compact design, neither model offers a built-in flash but both are shipped with one in the box that is powered by the camera’s battery.

Sony’s new lens mount for the NEX is called the E-mount and will work with many Alpha lenses with an adapter, along with other manufacturers lenses with the proper mounts.

See the Sony site for more.