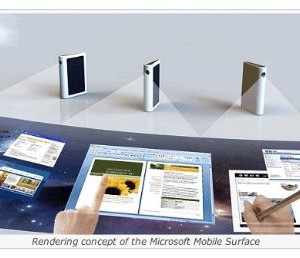 Talk about mobility reaching new heights, how about Microsoft’s recent  announcement the Mobile Surface PC. The company’s researchers have reportedly shrunk down their Surface tabletop computer into a pocket-sized package that essentially one-ups conventional touchscreen devices like Apple Inc.'s iPhone.

Hooked up to a small webcam and digital projector, the Mobile Surface computer demonstrated by Microsoft Research scientists at a recent in-house TechFest can create touch interfaces on any nearby flat surface — or even more remarkably, in thin air.

A YouTube video filmed by TechFlash, a Seattle-based online news site, shows a researcher fooling around with the tech, playing electronic drums by tapping his fingers in the air on top of a mobile Surface computer's projection of drum icons.

If you check out the video you’ll also see the researcher move forward to another screen by simply sweeping his hand slowly in the air from left to right, and expanding another by pushing his palm forward in the air until he touches the projected screen.

The prototype that Microsoft is demo’ing of this Mobile Surface device combines the features of their Surface touchscreen table-like computer along with a gesture-based interface from its coming Project Natal game control system for the Xbox 360.
Those that have seen the demo live are saying it is very reminiscent of the Minority Report interface demoed by startup PrimeSense at CES earlier this year.

We’ll be anxious to see where this is headed. We’d the sky appears to be the limit, but in this case it apparently isn’t.