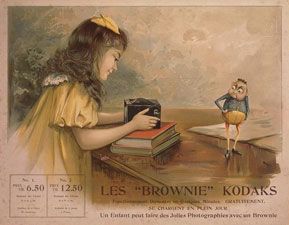 Selecting the all-time best of anything is always a daunting task, and that’s especially true of cameras, which have undergone a seismic paradigm shift in moving from film to digital. It’s also a great way to start arguments, generate irate letters and e-mails, and tick off your buddies at various camera companies.
Despite these qualms and caveats, I have forged fearlessly ahead and selected a dozen stalwart candidates that span just over a century, and I herewith present them with pride, fully expecting to receive a few raspberries and tomatoes from fans of cameras I have wittingly and unwittingly omitted.
I have tried my level best to select those cameras that were real trendsetters or had the greatest influence on the development of the industry as a whole, but keeping it down to a mere dozen inevitably entailed some hand-wringing compromises. Frankly I had far too much fun doing this to ask you to take pity on this hapless writer, but I nevertheless extend my apologies in advance to lovers of Hasselblad, Rolleiflex, the Leica M3, Kodak Super Six-20, Nikon D1 and Konica C35AF and many other worthy machines that did not make my cruel cut. I sure hope you find this enjoyable and informative, and I do welcome your comments.

1. Kodak Brownie, 1900
By offering a simple, competent, easy-to-use, daylight-loadable camera at the then-unprecedented price of $1.00 and putting a brilliantly conceived marketing program behind it, Kodak was literally able to sell a camera to practically everybody—and to motivate millions to buy it. This was the camera that made the snapshot possible, created the photographic mass market and exerted a profound influence on everything that came after it, even up to the digital point and shoot.

2. Leica 1, Model A, 1925
This is the camera that really put 35mm photography on the map and created widespread interest in the upstart “miniature” format. Announced at the Leipzig Fair in 1925, it was the first high-quality 35mm camera to be mass produced, and its watershed design defined and determined the direction photography was to take in the 20th century. It established the basic shape and control layout of 35mm cameras, as well as the viability of 35mm as a serious contender. The basic concept endured for over 35 years, during which time the Leica name was widely revered as “the best camera in the world.”

3. Kine Exakta 1, 1936
Made by Ihagee Kamerawerk, Steenbergen & Co., Dresden, Germany, it was the first widely distributed 35mm single-lens reflex camera, and its basic design profoundly influenced the legions of 35mm SLRs that succeeded it. It was called the Kine Exakta because it used 35mm cine film, and despite its distinctive trapezoidal-shaped body, left-handed single-long-stroke film-advance lever, left-handed shutter release and flip-up waist-level viewfinder, it still has the unmistakable look and features of a modern 35mm SLR, except for an eye-level pentaprism that didn’t appear until the Exakta Varex.

4. Nikon F, 1959
The legendary Nikon F was the first truly professional caliber SLR, and from its inception it was conceived as the basis for a high-quality professional SLR system. The Nikon F remained in production, with relatively minor changes, for nearly 14 years, and it established Nikon as the leading professional 35mm camera, a position not seriously challenged (by Canon) until the autofocus era. A handsome, rugged and reliable camera of modular design, its removable pentaprism and external meter-coupling system allowed the Nikon F to be retrofitted with the latest advances in metering technology by upgrading the meter prism, and its F mount has endured, with some operational changes, even until the present digital era—a remarkable example of non-obsolescence.

5. Pentax K1000, 1977
The Volkswagen Bug of 35mm SLRs and perhaps the most successful basic student SLR of all time, this simple, elegant, straightforward manual SLR is basically a Pentax Spotmatic F with a Pentax K-type bayonet mount. Competent and affordable, it was in production for over 20 years—first in Japan, later in China—was made in huge numbers, and still holds its value on the used-camera market. Its features include: a single-stroke film-wind lever; a fixed eye-level pentaprism; a cloth focal-plane shutter with speeds from 1–1/1,000 sec plus B; and through-the-lens center-weighted meter reading off the screen at maximum aperture. Its standard lens is a 55mm f/2, 50mm f/2 or 50mm f/1.7 smc Pentax. A fine-performing beginner camera, it was widely imitated and introduced millions to the joys of SLR photography.

6. Minolta Maxxum 7000, 1985
The world’s first fully integrated autofocus SLR with the AF system built into the body, the Maxxum 7000 created a sensation when it was announced, and it was a phenomenal sales success that catapulted Minolta into the technological forefront. A full-featured 35mm SLR, it used a passive AF system and autofocus motor that coupled to the focusing mounts in the AF lenses. It focused fairly rapidly, representing a considerable advance over previous AF systems, but it is no match for today’s DSLRs. The Maxxum line provided the mechanical basis and lens mount that were developed into today’s advanced Sony Alpha DSLRs.

7. Sony Mavica, 1981
The original Mavica was not really a digital camera—it was essentially a television camera that recorded TV-quality still images on 2-inch magnetic floppy disks called Mavipaks. Its single-speed 1/60-sec shutter allowed it to freeze frames within the limits set by the twin-field interlace making up the complete frame. The Mavica of 1981 was an SLR with interchangeable lenses, but the resolution of its 10x12mm CCD was only 570×490 pixels, lower than VGA. Nevertheless, it implied a whole new world of imaging possibilities that were to be developed, by Sony and many others, with unflagging dedication and at an amazing pace. To quote from Sony’s original announcement: “The Mavica system . . . uses no photographic film and therefore does not require developing and printing processes, which are indispensable to conventional chemical photography. This new video still camera represents an epoch-making innovation . . . and a fundamental change in the concept and technology of photography.”

8. Kodak DCS 100, 1991
The first digital SLR offered for sale to the public, the DCS 100 shows just how far digital imaging has progressed in 20 years. Basically a Nikon F3 incorporating a 1.4 megapixel Kodak CCD image sensor measuring 20.5×16.4mm, the DCS 100 required a heavy, bulky tethered monitor/control unit, had 200MB of internal flash memory and yielded SCSI image files. Its small CCD meant that a 28mm lens provided an angle of view equivalent to an 80mm lens. The whole rig was carried around in a fairly large suitcase, and it cost over $30,000. Despite these limitations, the DCS 100 and its successor, the DCS 200, sparked sufficient technical interest and user involvement to pave the way for the vastly improved digital SLRs of today.

9. Nikon D100, 2002
The first digital SLR to score a resounding sales success among pros and serious enthusiast photographers, the D100 combined pro-level performance and features in an ergonomic body with a built-in flash—at a price point (about $1,600) to attract enthusiasts. The broad appeal of the D100 spurred other makers, notably Canon and Pentax, as well as Nikon itself, to expand the emerging DSLR mass market. The D100 featured: a polycarbonate body similar to the 35mm Nikon N80; an APS-size, 6.3 megapixel CCD sensor; shutter speeds from 30–1/4,000 sec plus B; ISO 100–1600; a 1.8-inch LCD; continuous and single-servo AF; 3D multi-sensor balanced fill-flash with Nikon-dedicated units; program, aperture and shutter priority plus manual metering modes; illuminated LCD info displays; and, of course, a Nikon F mount. The Nikon D100’s outstanding performance and relative affordability kept it among the top DSLR contenders for three years, and many are still in use.

10. Canon EOS Digital Rebel, 2003
The first digital SLR with a retail price under $1,000 (complete with 18–55mm f/3.5-5.6 Canon EF-S lens), the Digital Rebel was the opening salvo in a trend that revolutionized the photo industry by moving the DSLR squarely into the mass-market arena. Featuring a 6 megapixel CMOS image sensor, an illuminated LCD control panel, a 1.8-inch TFT color LCD and push-button controls on the back, it is truly a camera that redefined the DSLR breed and pointed the way to new directions in digital photography.

11. Apple iPhone, 2008
The ubiquitous iPhone has revolutionized the way we take, share and perceive images and integrate them into our lives. Indeed you can use these pocketsize, multifunction devices to e-mail, post your images to social networking sites or send them to printout and posting sites. Incorporating 3MP, 5MP and soon 8MP cameras capable of shooting impressive still images and HD movies, the iPhone and its ilk may be putting a crimp in point-and-shoot sales, but they’re also generating some fascinating accessories like a case that will print iPhone images, DSLR lens adapters and the Steadicam Smoothee. Savvy dealers will see the iPhone as an opportunity and a printout stream to tap into. They’d better, because these things are not going away—just getting better all the time!

12. Sony Alpha SLT a55, 2010
The Sony a55 is an interchangeable-lens camera that provides the basic functional equivalent of a DSLR but takes the concept to a whole new level by eliminating the flipping reflex mirror and optical finder, thus allowing multiple operations to be performed simultaneously rather than sequentially. Behind the lens is a proprietary Translucent Mirror that reflects the image up to the camera’s autofocus and autoexposure sensors, providing accurate AF and AE information up to and even during the instant of exposure, a feat not possible with a conventional DSLR. The result is a moderately priced, broad-spectrum camera that can shoot bursts up to 10 frames per sec, capture Full HD 1080p video movies at 30p or 60i, complete with full-time phase-detection AF, and much more. This represents a key step in moving beyond the limitations set by the traditional mechanical and optical systems and is destined to yield a whole new generation of cameras with unprecedented capabilities.