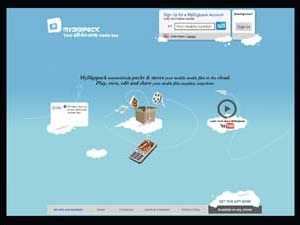 The world of imaging apps for smartphones and tablets just continues to grow and now, we dare say, even astound. It appears there is no limit to what you can do with your images through the thousands of photo apps that populate the app-sphere.

The really good news here is these apps are essentially helping to keep your customers more engaged with their mobile images and will also likely add to the creation of more images they may want to do something additional with . . . like perhaps turn them into photo merchandise at some point.

As a retailer you should always encourage the joy inherent with downloading and using these apps and forever suggest they get their images off of their mobile devices and into their lives as prints, wraps, collages, photo books, etc.

Here are 10 we’ve eyed recently that should help do exactly that.

1. Apple has helped popularize the idea of storing mobile photos and videos in the “cloud” with its iCloud service. But for those who don’t own an Apple device or don’t want to lock themselves into Apple’s ecosystem, a new service called MyDigipack (mydigipack.com) might be worth a look.

The service is similar to iCloud—but a bit more versatile. The app (available on Android, iPhone and Windows Phones) will automatically upload photos and videos taken on a mobile device to its cloud, where the user can access and share them via a web browser. They’ll get 1GB of storage free (vs. 5GB free on iCloud) and storage plans start at about $1 a month.

2. One of the treasures that has been lost in the digital world of photography is the mystery behind not knowing exactly what you captured with your camera until after you developed the photos. Hipstamatic now has an app dubbed Disposable (disposable.hipstamatic.com) that is attempting to bring the excitement of the unknown back to some extent.

Billed as “the world’s first social camera,” their new app comes with what they call virtual rolls of film, but instead of providing 24 exposures, the app actually connects up to 24 people on a social network and the multiple shooters the user chooses then divvy up the 24 shots. Kind of like passing around a single-use film camera.

No one sees the photos that have been captured until the entire camera is shot, at which time the 24 “exposures are developed” and automatically sent to everyone who installed the app and joined that particular camera’s grouping.

3. Well, we’ve raved in the past about the fun, creative and easy way the online video service Animoto (animoto.com) allows users to create personal videos with their stills and video clips, and now these geniuses are giving us a free mobile app (animoto.com/features#mobile) for creating these little masterpieces on-the-fly.

While creating and editing video on the iPhone’s small screen would seem to present some challenges, the Animoto app does all the work for the user. All they need to do is pick the style, song, photos and text they want in their customized video. The company explains that the idea behind the app was to create a product that anyone can access without knowing anything about video editing.

The set up is similar to using the Animoto service at their site, but the app pares things down a bit as there’s roughly 500 free songs to choose from and five theme styles (Animoto Original, A Wonderland of Snow, Cosmic Tidings, Vintage Voyage and Watercolor Seashore). The app then takes the selected images and stitches them together to the beat of the chosen music. The usual social network-sharing options are present and the app requires an iPhone, iPod touch or iPad running iOS 4.3 or later.

4. Many of your customers may have finally upgraded to a new point-and-shoot camera or maybe they even broke the bank and purchased a DSLR. Good for them. But what good is having a fancy new camera if all they ever do is take crummy pictures with it?

The creators of an online photography teaching service, Digital 1 to 1 (digital1to1.com), have introduced what they are calling “the ultimate photo learning app for the iPhone and iPad.” Since many of your customers may fall into the above category, it’s worth a look.

They have made their entire library of how-to photography videos available as a downloadable app for the various popular Apple devices. These innovative video pods, as they refer to them, are designed to help the novice take better digital photographs. The entire library is comprised of easy-to-follow short video clips (around four minutes long) that tackle the basics of digital photography for owners of both point-and-shoot and DSLR cameras.

Some of the areas the videos tackle include composition, camera controls, using flash and shooting sports, but the clips also include more advanced areas such as using reflectors, understanding ISO ratings, interpreting white balance, histogram data and much more.

It certainly stands to reason that better photos should lead to better profits. . . . no?

5. It has come to this—an iPad 2 app that can actually measure your vital signs, a true what-app-will-they-think-of-next moment. Philips recently launched the app dubbed Vital Signs Camera (vitalsignscamera.com) that can measure your heart rate and breathing via the tablet’s camera.

Philips tells us they have been developing the camera technology for three years. “Although the concept is simple, calculating multiple parameters, such as heart rate and breathing rate, from real-time video images is a major technical challenge.” Philips adds that this breakthrough innovation has wide market potential.

6. It’s hard to get noticed in the increasingly crowded mobile photography market, but Streamzoo (streamzoo.com) is giving it a shot by blending photo-sharing features with social gaming. The app—available for Android and iPhone models online—turns photos into a social competition with a leaderboard, user-awarded points and badges that can be obtained through the users’ photography.

Photos can be tagged with hashtags, much like Twitter, so interested users can also search for the users’ images. Photos shot within the Streamzoo app can also be shared on Facebook, Twitter and Tumblr. There are (naturally) filters and borders available as well as some basic editing tools such as brightness and hue adjustments.

7. For photogs whose creative juices begin flowing at a moment’s notice, Adobe Systems tells us their six new creative/photo-editing apps “enable anyone to explore ideas and present their creativity anytime, anywhere.”

The family of six touch-screen applications are designed for both Android tablets and the Apple iPad and address multiple areas of the creative process: image editing; ideation; sketching; mood boards; website and mobile app prototyping; and presenting finished work.

From what we’ve seen the top banana is likely to be Photoshop Touch, billed as “a groundbreaking app that brings the legendary creative and image-editing power of Photoshop to tablet devices for the first time.” This one will allow the user to transform images with simple finger gestures, combine multiple photos into layered images, make edits and apply professional effects. The tablet-exclusive Scribble Selection Tool allows users to easily extract objects in an image by simply scribbling on what to keep and then what to remove.

Adobe expects to make an announcement regarding iOS availability in early 2012. Pricing is currently set at $10 for each app. adobe.com

8. This one’s been around for a while but remains wildly popular. You know the old expression, “the camera adds 10 pounds”? Well an app dubbed FatBooth aims to pack on those virtual pounds in a fun and perhaps even a bit gross way. The FatBooth iPhone app lets the user snap a photo portrait and add weight to the subject’s face. Personally, I await the app that does the reverse. For the privilege of packing on these virtual pounds you can fork (get it?) over $.99.

9. Kodak is taking an interesting new approach with their updated Gallery iPhone app; they’re letting the user share photos in an “ad-hoc” network among other Gallery app users.

The process is pretty straightforward: in the app, the user shoots several photos and then invites other users (by e-mail, text or social network message) to join that album. The invitation will prompt the user to download the Kodak Gallery app (if they don’t have it). From there on, the invited users can view the photos in addition to adding their own to the album.

It’s similar to a few other social apps we’ve seen and is a really nice solution for events like weddings or parties where multiple cameras (and phones) are snapping but collecting all those photos after the fact can be a pain. Right now, the app is only available for the iPhone, but Kodak promises an Android version soon. kodak.com

10. For amateur videographers who oftentimes use their iPhone as a video camera—and we’re talking not just for capturing quick moments but shooting footage they may plan on assembling and editing later—we give them Filmic Pro (filmicpro.com), an app that gives them lots of interesting options with their mobile video.

Filmic Pro transforms the iPhone’s video camera from a simple point and shoot by giving it prosumer features. The camera lets the user set and lock their focus, exposure and white balance. On the back end, a set of menus allows the user to set the resolution, from 480×360 up to 1,920×1,080, though only the iPhone 4S supports that resolution.

The user can also set the frames per second from 30 all the way down to 1. There’s a simple audiometer, a thirds guide and a framing guide (2:35.1, a standard TV 4:3 and a cinematic 16:9). If the user wants to make their iPhone video look like it was shot on a 35mm movie camera, there’s a matte box function, too.

11. And here’s an extra app for good measure, as we know many of your customers are sitting on boxes full of photo prints that they (or relatives) snapped before the digital era. Digitizing them is an important step in preserving those images for the long haul, but what if they don’t have a scanner? Well, they could mail those images to a scanning service like ScanCafe or they could use their iPhone.

A new free app from 1000memories (1000memories.com) called Shoebox turns the iPhone camera into a digital scanner. Simply point it at a picture and the app can instantly recognize the edge of the photo and create a crisp scan of it. Depending on the resolution of the iPhone camera (i.e., whether it’s the 4 or 4S), the user will get a print-worthy scan that is automatically saved to their camera roll and uploaded to 1000memories.com where it is stored for free.

Okay, if the consumer is sitting on hundreds of pictures, the iPhone camera-scan isn’t necessarily the best way to go about digitizing them, but this app is perfect for grabbing photos in low numbers. (For instance, if they’re visiting with a relative and see a great picture they may want a copy of.)