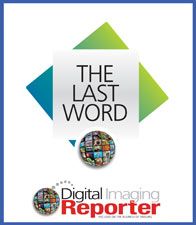 Not physically, of course, but most definitely in terms of both business and personal development.

My first thought when asked to write The Last Word was that of someone not involved in the imaging industry. What relevant thoughts do I possess that would provide added value to the readers of Digital Imaging Reporter?

Obviously it had to be about a topic that’s critical no matter what business readers happen to be involved in, which led me to the universal subject of . . .

For those who may be familiar with the term but not necessarily the practice, networking is an extremely broad subject that involves expanding one’s contact base primarily for business, although it also can be important in nonbusiness endeavors.

Within the “art” of networking exists a somewhat expansive list of rules that cover some of the “Dos, Don’ts and Try to Avoids.”

Whether networking for a business, a not-for-profit or some other reason, there typically is one simple goal. That goal, or the Holy Grail of networking, is to meet new people who in some way have synergy to your desired “endgame” or who can introduce you to people who do!

That endgame might be business expansion, an increase in one’s sphere of influence or  any number of other goals.

Therefore, Rule #1 is: The venue or event chosen by the networker to attend is vitally important! For example, the owner of a camera distributor may be hard pressed to find appropriate networking partners at a greeting card convention.

While that seems obvious, then Rule #2 kicks in: Truth be told, anywhere you happen to be can be fertile networking ground.

Confusing right? Well the bottom line is that anyone you are speaking with may possess contacts in their “Rolodex” of people who would be beneficial for you to meet. One of the basic tenets of networking is that it’s not necessarily the 30 people physically in a room who will be your ideal contacts but the people they may know.

So while you may be better suited attending a digital imaging conference than wasting time and money attending a greeting card convention, never assume you know who the person you are speaking with knows!

Win-Win Proposition
Now on to Rules #3, #4 and #5 that go hand in hand and are, in my opinion, three of the most critical pieces of networking.
Rule #3: Givers Gain.
Rule #4: Get to Really Know People.
Rule #5: Avoid Serial Takers.

“Givers Gain” is a term that is fairly self-explanatory, but in the universe of networkers, it’s not always followed by a high percentage of participants. To summarize, it basically says that if you first look to help other people, those same benefits will come back to you. It works, but for some it is a counterintuitive concept, as too often people network looking for immediate gratification. Who hasn’t seen the one or two people at an event who walk around simply handing out business cards? Do not be one of them!

If you meet someone you believe you may be able to help (and possibly vice versa), get to know that person! This typically involves meeting to talk on a level different than the one that’s possible at an event. The conversation you have at that second meeting may even have little to do with the specific topic that brought you together in the first place.

However, before you make a new introduction to someone in your sphere of influence, you want to have a clearer picture of whom you are endorsing. Even then, there’s no guaranty of success, but the extra work to try and ensure that a synergy actually exists is a necessity!

Finally, you want to feel that the person you are helping will seek to help you if the opportunity arises. But does this mean everyone you help can and will help you as well? Certainly not, but you never want to feel that a relationship is purely a one-way street.

This brings me to Rule #5: Avoid Serial Takers! This rule can be difficult because it can take time for you to actually determine if you are dealing with a serial taker. But once you know, you’ll have to proceed at your own risk! You can certainly still help them, but know that you should expect nothing in return.

The bottom line? Networking is an important tool for business development that can also be incredibly rewarding and gratifying when you successfully help someone else!

Michael Haltman is the owner of Hallmark Abstract Service, which provides title insurance for real estate transactions in New York State. He has an MBA in finance, as well as a bachelor’s in economics, from the State University of New York at Albany.