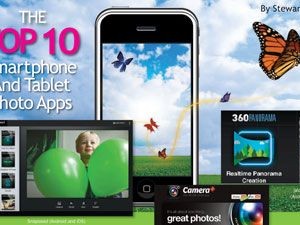 Generally speaking, cameras in smartphones are substandard compared to DSLRs, compact system cameras and even point-and-shoot models. Those tiny pinhole lenses simply aren’t a match for the optics found in “real” cameras, and neither are the tiny sensors that make low-light shots such a challenge for smartphones.

But obviously folks don’t care. In a devil’s bargain, consumers are willing to accept “good enough” and willingly trade quality for convenience.

Like photographic white knights, app developers have ridden (or programmed) to the rescue with advanced applications to replace the faulty default iPhone and Android phone camera features. They are providing advanced filters, effects and after-shooting editing apps, as well as enabling cameraphones to perform tricks no digital camera can perform.

We’ve picked a group of each of these types of smartphone and tablet apps to comprise our top 10 photo app list.

REPLACEMENT CAMERA APPS
Camera+ (iOS)
Arguably the ultimate iPhone—and now iPad—replacement camera, Camera+ adds back the touch-to-focus feature Apple’s default camera app used to have, plus it provides point-and-shoot-like scene modes, borders and captioning capabilities, cropping and effects, and an after-shot digital flash to lighten dark scenes. For the iPad version, brushing and layering capabilities are included, along with straightening, red-eye, sharpen/blur, white balance and tone tools. Unfortunately, there’s no video option; iPhone shooters have to switch to another app or iPhone’s default camera. Developed by Tap Tap Tap, it’s regularly $1.99, but at press time Camera+ was available for $0.99. campl.us

Camera Awesome (iOS)
For the more cautious, Camera Awesome, by SmugMug, has a lower cost of entry than the Camera+ app—it’s free. But it’s not merely an alternative to Camera+. In addition to a host of composition, filter and editing functions, Camera Awesome does video, including a sort-of time machine; it captures five seconds worth of action before shooters actually start video recording. Plus, its on-screen menus are transparent, so they don’t block the view of what’s being captured. In fact, its entire interface is more intuitive than most iPhone/iPad replacement apps. Even though Camera Awesome is free, it can get expensive; users can buy more than 250 additional effects and filters: nine for $0.99 and 262—and 143 combinations—for $9.99. awesomize.com

Camera ZOOM FX (Android)
Considered the best replacement camera app for Android, Camera ZOOM FX gives users a 10-burst mode, 6x digital zoom and the ability to customize the smartphone’s buttons. It also provides DSLR-like controls, including ISO, focus metering, exposure and saturation. There’s also a timer, 2×2-inch passport photo-style combos (although we’re not sure if these can be officially used), a host of effects, filters and editing functions, an on-screen meter that measures how much the shooter’s moving to help keep blur to a minimum, and the ability to switch to video mode. $2.99. androidslide.com

FILTER/EFFECTS/EDITING APPS
Hipstamatic (iOS)
Here’s an app for film buffs—no, not movies, photos shot on old consumer film cameras. Hipstamatic provides analog film, no-frills camera nostalgia (the name obviously derives from the cheap Kodak Instamatics), like shooting through those tiny viewfinders. Users can choose from a variety of particular film types, lenses and flashes to achieve a distinctive analog look to their shots. The app comes with three film types, four lenses and three flashes; additional film/lens/flash combinations can be bought for $.0.99 each. App users can also order analog prints online or from within the app and share photos with other analog film enthusiasts. $1.99. hipstamatic.com

Pixlr-o-matic (Android and iOS)
For photographers who don’t want to be overburdened by the effects offered within a smartphone camera app—or who’d like to futz with photos they’ve already shot—this free multi-platform app (also available for desktop Windows and Mac PCs) from Autodesk, the AutoCAD folks, offers possibly the widest variety of filters and effects on the market. Users can create or choose from more than two million combinations of effects/overlays/borders, but if that’s too overwhelming, the app’s “randomizer” auto-selects a combination. And if you think two million combinations aren’t enough, users can buy more. Free. pixlr.com/o-matic

Snapseed (Android and iOS)
Perhaps the best editing app available—even more expansive and easier to use than Adobe’s Photoshop Express—Snapseed from Nik Software lets users edit an entire snapshot or just portions of a picture. They can just hit auto-correct or swipe and pinch their way through granular brightness, contrast, color, tilting, texture, sharpening and saturation adjustments. They can even adjust center focusing and get a not-overwhelming selection of filters and effects, and the app never overwrites the original photo. Snapseed, however, is $5 while Adobe’s Photoshop Express is free and can be integrated with an Adobe desktop editing software. $4.99. snapseed.com

TRICK APPS
360 Panorama (Android and iOS)
iPhone’s panoramic function is the stupidest-simple panoramic app ever, but it does create a rather distorted image if you try and capture too wide a panorama. 360 Panorama from Occipital performs as advertised: when users scan a screen, the app stitches together the stills and they quickly get an encircling image. And app users can now explore their captured surroundings thanks to the phone’s gyroscope. Images can be posted and shared at the app’s website; the app isn’t required to view the results on a phone or a desktop PC. And all panoramas are GPS tagged, including compass heading, so viewers will know precisely where an encircling panorama was captured. $0.99. occipital.com/360/app

Cinemagram (iOS)
Spooky or spectacular, this app animates one part of a photo (by creating a repeating GIF). When users shoot two or three seconds of video with this app, they can then pinch/zoom to indicate a section of the photo they’d like to move—someone’s hand waving, an object in flight, etc.—and that section of the photo springs into action while the rest of the photo remains static. Or, several spots can be animated, and even the whole image. Cinemagram, however, now has a free competitor – Flixel. While easier to use, Flixel does suffer from stability problems. Perhaps once its crashing problems are solved, it will replace Cinemagram on this list. $1.99. cinemagr.am

GroupShot (iOS)
Inevitably, when a family or group of friends line up for a photo, someone blinks. Okay, let’s try again—oh, she wasn’t smiling. One more—oh, stop with the rabbit ears! None of these problems exist in the GroupShot app world. Users can pull a bunch of group shots into the app, rub away the offending face and choose that person’s face from another of the group photo attempts—and the app somehow integrates the new face into the group photo. From Macadamia Apps, this is one of those apps that’ll be tucked away for that one occasion when it’s needed. $0.99. groupshot.com

Photo Grid (Android, iOS, Windows Phone 8)
A frequent gift is a photo collage, but the creation of these collages can require a photo professional or a lot of DIY trial and error. Not anymore. With Photo Grid, users can pick up to nine photos and choose from a collection of wide or tall collage grid templates, and the app then creates the collage. Don’t like the arrangement? They can freely drag-and-drop to swap, zoom, rotate or crop the photos within the collage. If they don’t like any of the templates, they can create a collage freehand. All collages can be shared via all the usual social media suspects. Free. slickdroid.blog.com