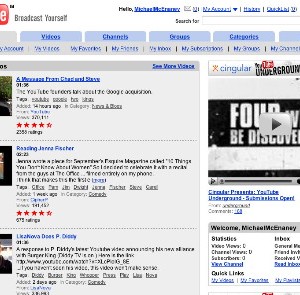 In this “Look-at-me” culture we live in today, it is worth noting all the recent movement we are witnessing on the video front as companies begin jockeying for a piece of what may be a very lucrative pie.

Microsoft’s recent launch of their own online video service coupled with Google’s mind-boggling purchase of YouTube (for a whopping $1.65 billion) would seem to indicate that video may very well be the memory capture medium of choice for a not-to-distant future generation.

Microsoft’s setup is dubbed “Soapbox on MSN Video” and the site will essentially let Internet users watch and post videos, rate or comment on them and share favorites by e-mailing them or linking them to their personal Web pages or blogs.

Rob Bennett, general manager of MSN’s entertainment and video services unit, acknowledged YouTube Inc. and certainly has the early lead in this area, but adds there is room for improvement with this model. “There is still plenty of room to innovate, and go beyond what I would say most services provide … just sort of the basics, a very kind of primitive experience that is not that engaging,” Bennett said. “It’s not that fun to use. It just gets the job done.”

Microsoft tells us one of the improvements in their service will involve videos being displayed in slightly larger windows than those competing services offer, and users will be able to expand videos to the full screen while they are playing, rather than having to jump back to the beginning and start over.

The Google/YouTube deal is as much about YouTube’s 34 million visitors a month as it is about the sites’ innovation in the video-sharing realm. In the Internet world “the eyes have it” and this deal clearly was about Google’s attempt to tap into YouTube’s huge and unique traffic numbers. However, those following this deal add that the video usage in the U.S. is growing rapidly and that hand-held video devices, such as digital cameras and cell phones with video capability are allowing consumers to show previously untapped creative talents.

It’s a trend worth keeping an eye on as still and video technologies continue to converge and consumers appear to be just beginning to realize the Internet is their stage – you just happen to sell the tools they need to perform.