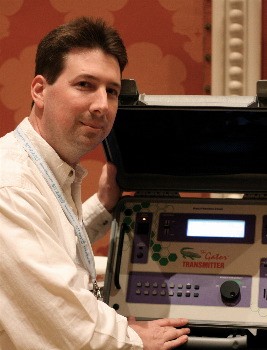 CTIA (a.k.a. the Wireless Show), that annual confluence of over 40,000 mobile prosumers and 1200 vendors who’d just love to talk them into one more “new, easy-to-download phone top app!” opens at the Las Vegas Convention Center today. Though all the major carriers and cellphone makers will be launch at least a few new handsets, the real buzz at the show is expected to be about the possiblility of 4G, that “fourth generation” of mobile devices that would deliver content at broadband speed. =

Sprint is very publicly attempting to build out a WiMAX network in the United States that could potentially have subscribers watching and sending video on their cellphones as fast as they do on home computers. But most other major wireless players, including Apple, are reported to be quietly (though with great expense) exploring the devlopment of networks and new mobile products to deliver on the 4G promise.

One highly-invested observer of the WiMAX evolution is Scott Schober, the president of Berkeley Varitronics Systems, a company which builds WiMAX testing transmitters and receivers, the equipment wireless companies are using to map out the most strategic spots for WiMax employment. “It’ll be a year or two before the politics settle out, but I fully expect to see a WiMAX option offered to people who are willing to drop $80 to $100 a month on subscription fees by 2009 or 2010,” he said last night at a Showstoppers CTIA-preview event. “It’s already out there, in many cities. I wouldn’t say it’s working successfully yet, but it’s there. You wouldn’t believe how much money is being spent before you and I get a chance to play with some sort of device that can use it.”

Schober says he expected Intel to be a major funder of WiMAX technology in the U.S. because the company, like Samsung and Nokia, has a lot invested in new mobile products, from laptops to UMPC’s or “internet tablets” which carry WiMAX-ready chipsets. These high-speed mobile products are expected to start making appearances on the CTIA showfloor today, prototype promises of a 4G digital lifestyle for Americans.