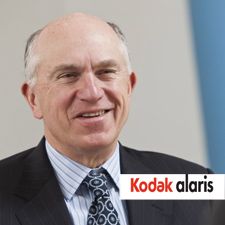 Elliott will be responsible for working with the management team to set and implement the strategy and direction of Kodak Alaris, liaising with the KPP and other third parties, and for the overall governance of the Kodak Alaris Holdings Limited board. In addition, Ralf Gerbershargen, Kodak Alaris CEO, will report to Elliott.

“The KPP and I are extremely pleased that Mark will join us as chairman of the board and provide senior leadership for Kodak Alaris going forward,” said Ross. “His solid experience in management, sales, software and services together with his diverse corporate board leadership will bring a fresh and bold perspective to our business that our customers expect from Kodak Alaris.”

While stepping down from his role as interim chairman, Ross will remain a nonexecutive director to represent the interests of the KPP on the Kodak Alaris Holdings Limited board.

Elliott is based in Florida but will spend some of his time in the UK. Founded in September 2013, Kodak Alaris was formed when the KPP of the United Kingdom completed its acquisition of the Kodak Personalized Imaging and Document Imaging businesses from Eastman Kodak Company. The Personalized Imaging business provides ongoing innovation to market imaging products and services, serving consumers, retail partners and photography professionals through Retail Systems Solutions (including kiosks and in-store processing solutions), Event Imaging Solutions (including theme park imaging), Paper & Output Systems (traditional photographic paper and software) and Film Capture (still camera film products). kodakalaris.com