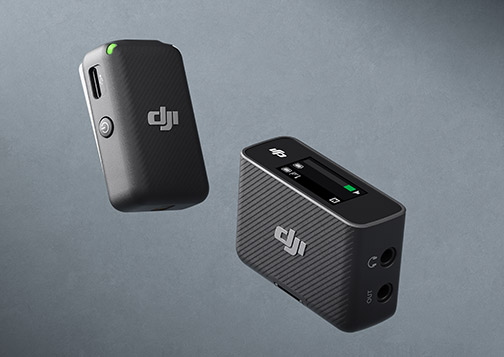 DJI released its original mic in October 2021 as an all-in-one solution. It featured two audio transmitters, one receiver as well as a charging case. Based on user feedback, the newDJI Mic (1 TX + 1 RX) offers a streamlined version of the audio system for studio-level sound recording on the fly.

The receiver (RX) and transmitter (TX) are paired out of the box and offer 5 and 5.5 hours of battery life, respectively. Moreover, the RX and TX have a range of more than 800 feet for truly wireless audio. The TX comes with an interchangeable input port to mount onto a smartphone’s USB-C or Lightning connector, as well as a hot shoe adapter for attaching to a camera.

Moreover, the RX has a built-in magnetic clip system that makes it wearable, without the need of a wired lapel mic. Furthermore, for standalone recording, the receiver has 8GB of internal storage to record up to 14 hours of 24-bit lossless audio. As a result, the DJI Mic (1 TX + 1 RX) is a solution for vlogging, livestreaming and various forms of content creation.

Weighing 11 ounces, it is a compact wireless microphone that is unobtrusive and easy to wear. In addition, a unique clip and magnet design provides flexibility for on-the-go sound recording.

The mic also features a 0.95-inch OLED touchscreen that allows for tapping and swiping to adjust recording levels, screen brightness and check battery levels. In addition, it plugs and plays into any computer to export audio files, with no special software required.

Lastly, the DJI Mic receiver supports USB-C, Lightning and 3.5mm TRS interfaces for compatibility with most smartphones, cameras and laptops. It’s also compatible with the DJI Ronin 4D, Osmo Mobile 6 and Osmo Action 3. Additionally, the transmitter remotely starts and stops the recording of a smartphone camera when the receiver is connected.