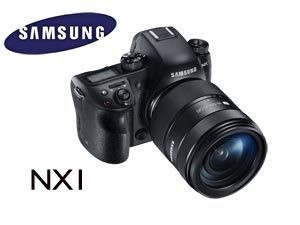 “The NX1 is the new flagship in our award-winning NX lineup. It brings together our Smart camera technology, new 4K video capabilities and Samsung’s fastest AF system to date in a lightweight, portable body. This blend of cutting-edge imaging technology appeals to a wide variety of photographers, and makes it one of the most competitive models in its class,” said Ron Gazzola, vice president of Marketing, Digital Imaging, Samsung Electronics America. “The combination of the new Samsung 50–150mm f/2.8 S lens and NX1 delivers an unrivalled shooting experience that gives users the confidence that they’re taking the best images or video in any situation.”

Working with the AF system is a new DRIMe V image processer that’s said to deliver “superior color reproduction” along with the camera’s Adaptive Noise Reduction technology. The advanced algorithm analyzes details and color in each photo. The NX1 also supports the use of phase-detect AF during movie recording, for steady results.

The camera employs Samsung’s auto shot, which uses the DRIMe V processor and an advanced algorithm to track, for example, a baseball as it travels to a player. Photographers are able to take crisp images of the moment a ball connects with a bat, as the NX1 accurately predicts the right time to trigger the shutter and capture a full-resolution image.

For videographers and filmmakers, the NX1 uses the next generation of HEVC codec to record UHD/4K (DCI Standard) video. Users can save files directly to the camera’s memory card, and with a range of input, output and connectivity options, they can customize their NX1 for their unique recording needs. They can also share their videos to any Samsung UHD television via Wi-Fi.

The NX1's NFC and Wi-Fi capabilities are said to offer the next generation of connectivity, so photographers can take advantage of it sharing features. The Tag & Go function lets users tap and share memories instantly, pairing the NX1 with NFC-enabled smartphones and tablets. Additionally, the NX1 incorporates Bluetooth 3.0 for an always-connected experience with a mobile device. After authenticating the connection via Bluetooth, the NX1 can collect time, date and location data and automatically import it into the image’s metadata. Once authenticated, the connection will automatically switch to a Wi-Fi connection for data transfer.

Other sharing features include: Photo Beam, which transfers images or videos to a smartphone or tablet by touching the two devices together with no other configuration needed; MobileLink, which lets users select multiple images to send to four devices at one time; AutoShare, to send every photo taken instantly to a smartphone or tablet; and the Remote Viewfinder Pro function, which enables control of the NX1 from a smartphone. Manual settings can still be accessed, including shutter speed and aperture, so that photographers can retain camera control yet have another option as to how they want to frame their shot.

The NX Lens Lineup Gets Faster
Expanding on its premium line of “S” lenses, the new Samsung 50–150mm f/2.8 S lens is the second in the series. It affords photographers the opportunity to capture telephoto images in a variety of scenarios. Its fast aperture provides low-light performance and artistic bokeh, making it suitable for sports, nature and wedding photography.

The lens’s “Ultra-Precise Stepping Motor” (UPSM), improved from the conventional Stepping Motor (SM), is said to be three times more precise in its ability to control and focus on subjects. It’s also designed to enable photographers to capture sharp photos at low shutter speeds using multi-axis optical imaging stabilization with four-axis control and a six-axis sensor array. These sensors detect camera motion, and help the lens to make the precision corrections necessary.

The new telephoto lens features a dust- and water-resistant build. All of its controls, focus, zoom and OIS are located in a single “function zone” on the side of the lens. The Samsung 50–150mm f/2.8 S lens sells separately for $1,599.99. samsung.com