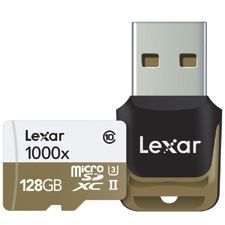 “As the many uses for microSD cards grow and evolve, we want to provide users with the best possible workflow solution,” said Adam Kaufman, director of memory card product marketing, Lexar. “The Lexar Professional 1000x microSD UHS-II cards allow users to enjoy the benefits of the latest UHS-II devices, while also performing at the maximum speed threshold of UHS-I devices, and provide exceptionally fast file transfer when used with the included reader. Whether it's with a tablet, smartphone, or quadcopter, the new Professional 1000x microSD UHS-II cards will capture and move content faster than ever before.”

The microSD cards leverage Ultra High Speed II (U3) to provide faster capture, playback and transfer of both high-resolution photos and extended lengths of high-quality 1080p Full HD, 3D and 4K video, to preserve more than 15 hours. The cards are also being marketed to photographers who need multiple cards for extended use to capture aerial content with a quadcopter.

Available in 32GB, 64GB and 128GB capacities, Professional 1000x microSD UHS-II cards, as with all Lexar Professional cards, come with a lifetime copy of Image Rescue software to recover any lost or deleted files. And each card is backed by a limited lifetime warranty.

“While the new UHS-II technology allows us to boost read performance in our microSD product line by more than 50%, we’ve retained full backward compatibility to older SD 2.0 and UHS-I SDR-104 hosts, allowing consumers to have full use in older devices while benefitting from the higher read speeds of the new interface,” added Wes Brewer, vice president and general manager, Lexar.