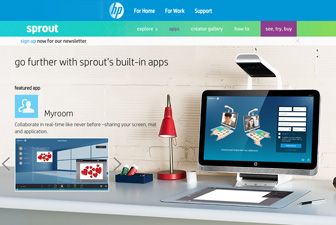 Sprout includes an Intel Core i7 processor, 1TB of storage, a Windows operating system, Intel Real Sense 3D cameras and two 23-inch touch surfaces that work together to transform a desk’s surface into a digital-physical workspace.

“These new applications continue to expand HP’s immersive computing ecosystem,” said Eric Monsef, Highly Immersive Systems, HP. “Both small and industry-leading app developers are drawn to the platform as it unlocks unique, immersive experiences for both consumers and professionals.”

As a new technology, Sprout is designed to expand the limits of creative possibilities and open doors for consumer and creative professionals who want to create something completely new. When available, the following applications will be offered through the Sprout Marketplace.

This app allows kids to apply animated effects through special colors such as Fire-Breath and Ice-Blast. They can save their characters and bring them out to play in 4D anytime. The app already includes 18 free action-coloring pages.

Guiding learners through the process of folding a variety of origami models, the app projects instructions on Sprout’s mat. It takes the user step by step through the folds while Sprout’s upper screen provides animated and verbal instructions.

Using Sprout’s downward facing camera, this app enables users to measure objects in real-time. The measurements are projected on Sprout’s mat overlaying the real object and shown on the vertical screen. With the ability to change from metric to imperial systems and different unit measures, the app is expected to be ideal for crafters, makers, professionals and educators.

This is a creative sketching tool for drawing, doodling, whiteboarding or producing creative artwork or designs. The app integrates with Sprout’s overhead cameras for capture and import of 2D objects. It also provides an unobstructed full-screen preview of the canvas on the vertical screen and features an “infinite canvas” with pin-able views to add a new level of brainstorming, drawing details or storytelling.

To easily create stop-motion videos, the app captures real objects as digital assets by using the two Sprout cameras. Users then mix them up with screen captures and edit using intuitive features like frame duplication, image cloak and delays. Users can also record sound from a microphone or import an audio file to enrich the video production.

This app enables users to trace, etch or stencil on physical objects using an image or design of their own creation. The app projects the image to the horizontal mat. Then users can apply effects, rotation and also scale to the projected image. Finally, users trace, etch or stencil the projected image onto their preferred material; for example: wooden blocks, T-shirts, leather or a cake.

It provides a seamless and efficient workflow for recording video content from multiple cameras on Sprout and the live screen content at the same time. Users can trim and create multi-shot videos that can share instructions, projects, presentations or special moments. It enables Sprout users to create their own video content. As a result, it is an ideal platform for instructional video production.