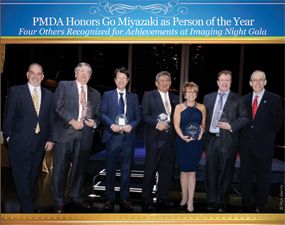 Las Vegas, NV—The PhotoImaging Manufacturers and Distributors Association (PMDA) honored five industry veterans at their annual International Awards Dinner, held January 5, 2015 at the XS nightclub in the Encore. Go Miyazaki, corporate vice president of Fujifilm Corporation, president and CEO of Fujifilm North America Corp., and chairman and CEO of Fujifilm do Brasil, Ltda., was recognized with the Person of the Year Award at the 2015 Imaging Night event.

Attended by more than 200 industry executives and members, the event began with an audience surprise when famed illusionist Shimshi dazzled the crowd with an incredible performance that had them mesmerized. Following this, PMDA’s president, Dan Unger, welcomed the audience. “We hold this event each year to shine the light on the achievements of the imaging industry,” said Unger. “We always want to make sure that the incredible breakthroughs that take place each year are given a platform for the industry to show their appreciation.”

Jerry Grossman, PMDA executive director, then reviewed the association’s activities for the year. Especially poignant was his presentation of the Portraits of Love program, which encourages professional photographers to volunteer their time to take portraits of U.S. military families that are sent to active duty personnel worldwide. After explaining that the program was represented on 20+ USO bases this year, with more than 400 volunteer photographers, Grossman showed an emotional video highlighting a selection of portraits of the families and loved ones of military members.

Following a presentation by National Geographic, one of the evening’s sponsors, which highlighted the emergence of Instagram as an important tool for spreading their awesome photography, PMDA board member Jim Malcolm presented the Herbert Keppler Technical Achievement Award to Hajime Murano, managing executive officer, Sales and Marketing, Ricoh Ltd., on behalf of Wataru Ohtani for his work on 360º photography highlighted by the Ricoh Theta.

Board member Jay Kelbley then introduced Matt Sweetwood, who gave an overview of the Josephine Herrick Project, an organization that uses photography to improve the lives of youths and those with emotional or physical issues.

Grossman then presented John Clouse with the Norman C. Lipton Lifetime Achievement Award in recognition of his more than 35 years of service to the imaging industry. Clouse climbed the ranks of Nikon beginning in the 1960s, and his contributions were duly noted and cheered by the audience, including current Nikon employees in attendance.

Board member Paul Zakrzewski then introduced Joe McNally as the winner of the 2015 Professional Photographer Award. McNally followed his heartfelt acceptance speech with a 15-minute presentation of his work in photojournalism and commercial photography. Especially emotional was his portrait work taken of emergency workers following 9/11.

Joellyn Gray then presented the Visionary Award to Fullerton Photographic’s founder and president, Gabrielle Mullinax, a leader in creative photo printing. Cheered on by her large contingent of family members and fans, Mullinax said she was humbled by the award and encouraged dealers and the industry to adopt the concept of the photo design center and focus their efforts on presenting output solutions to customers using their creativity and resources.

Dan Unger then welcomed Go Miyazaki to the stage to accept the PMDA Person of the Year Award. The award recognized Miyazaki’s role in Fujifilm’s success in both the capture and output sides of the business, and his leadership of the company.

“I am honored to receive this significant award from PMDA,” said Miyazaki. “It was made possible by the hard work of all Fujifilm employees, both here in North America and in Japan. Our success reflects our commitment to excellence and our constant search for innovation. Each year we try to spend 20% of our resources experimenting with new products, services and marketing, while spending 80% on delivering success in our traditional business.”

The evening ended with Unger thanking the crowd for recognizing the important members of the imaging industry who are making a difference, and saluting the industry itself for its groundbreaking achievements. pmda.com