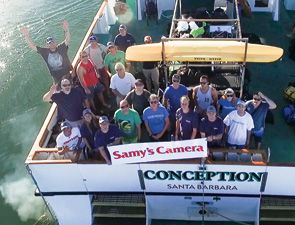 San Diego, CA—Sony has been conducting interactive events nationwide to allow photographers to test out its flagship mirrorless A7R II camera, as well as Cyber-shot RX100 series models and Sony Action Cams. On August 28–29, Samy’s Camera and Sony held an underwater scuba event off the Santa Barbara coast in the Channel Islands.

Focused on underwater photography, it gave attendees the opportunity to shoot with Sony cameras below the surface of the Pacific Ocean. Nauticam and Sea & Sea provided the 24 participating photographers with underwater housings for the Sony cameras.

The workshop was led by Donald Schultz, a well-known photographer/videographer who has been featured on Shark Week as well as other Discovery Channel and BBC network shows. sony.com and samyscamera.com