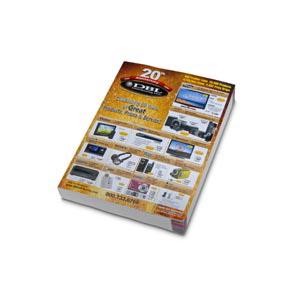 DBL Distributing, coming off a management shakeup earlier in the week, on Tuesday announced the release of its spring-summer catalog for 2009. the catalog, running 1,200 pages, includes 23,000 items from over 630 product lines.

The catalog includes such new categories as NXG box speakers and mounts and flip video cameras, while manufacturers new to the catalog include headphones from Sirius Satellite Radio, Wicked and Radius, Bluetooth devices from Blue Fox and MotorTrend and computer bags and backpacks from SwissGear and McKlein.

"With thousands of new items and permanent price reductions, DBL has once again produced the ultimate "just in time" buying guide and resource for consumer electronic retailers across the United States," DBL senior vice president Tim Coakley said as part of the announcement.